Footage has emerged of Berlusconi, 85, enjoying a lavish ‘festival of love’ with 32-year-old Marta Fascina, an MP in his Forza Italia party, at a historic property called Villa Gernetto in the town of Lesmo, north of Milan.

It represents the latest declaration of love between Berlusconi and Fascina, after the former prime minister released photos of the pair gazing longingly at each other amid Fascina’s birthday celebrations in January. 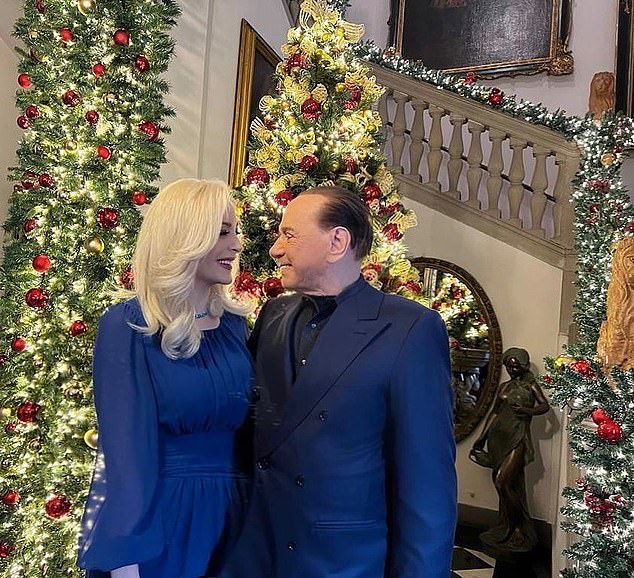 In this image posted on Facebook in January, 85-year-old former Italian prime minister Silvio Berlusconi (R) gazes into the eyes of 32-year-old Marta Fascina, an MP in his Forza Italia party, wishing her a happy birthday

The ceremony looked very much like a wedding, but the couple were not officially married because of an inheritance row between the families.

Berlusconi’s five adult children were believed to be outraged at their father’s intention to marry Fascina, which would have given her a claim to the 85-year-old’s fortune of over £5 billion. 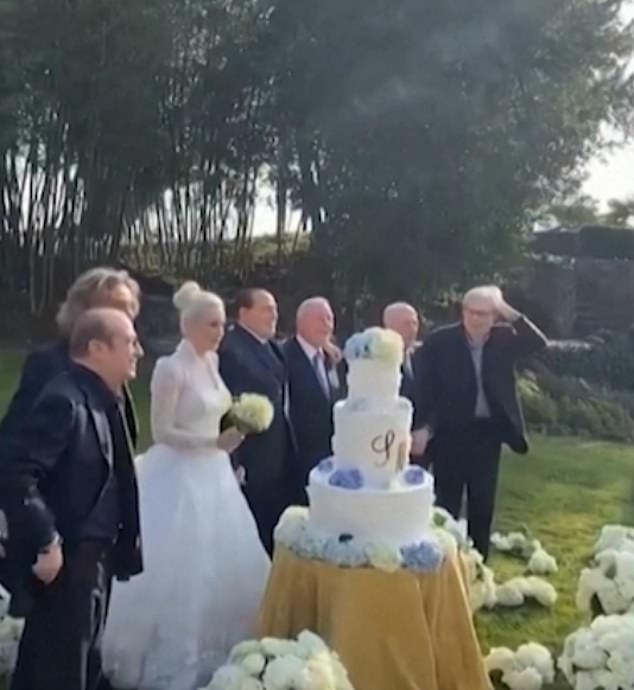 Berlusconi can be seen on the left of the picture, standing alongside Fascina who is wearing a white wedding dress and holding a bouquet of flowers

Seemingly undeterred by health woes, sex scandals and advanced age, Berlusconi proceeded with the ceremony alongside his girlfriend, which was styled as a ‘festival of love’ rather than an official union.

Fascina is Berlusconi’s latest romantic conquest after he broke off his previous relationship with Francesca Pascale in 2020, who at the ripe age of 34 was simply too old for him.

Fascina is a Calabrian literature graduate at Rome’s Sapienza University, according to Italian news site ANSA, and boasts more than 16,000 followers on her Instagram account where she mainly posts political content.

Though Berlusconi’s penchant for younger girlfriends is evident, the 85-year-old has been the subject of several sex scandals with prostitutes, and is still on trial for bribing witnesses in an underage prostitution case.

The former PM was previously convicted of paying £6 million to underage Moroccan prostitute Karima El Mahroug, also known as ‘Ruby the heart-stealer’, for sexual services between February and May 2010, but was later found not guilty on appeal.

El Mahroug was reportedly an attendee of one of Berlusconi’s many ‘bunga bunga’ sex parties held at his private villa.

Besides his reputation for ‘bunga bunga’ parties, Berlusconi was temporarily barred from public office after a conviction for tax fraud in 2013, and has been accused of several cases of embezzlement. 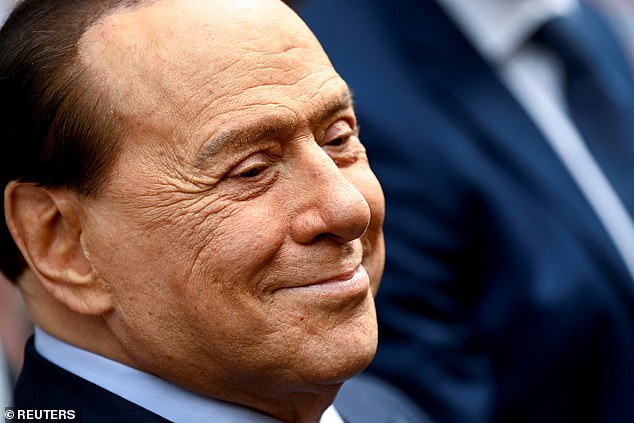 Seemingly undeterred by health woes, sex scandals and advanced age, Berlusconi proceeded with the ceremony alongside his girlfriend, which was styled as a ‘festival of love’ rather than an official union 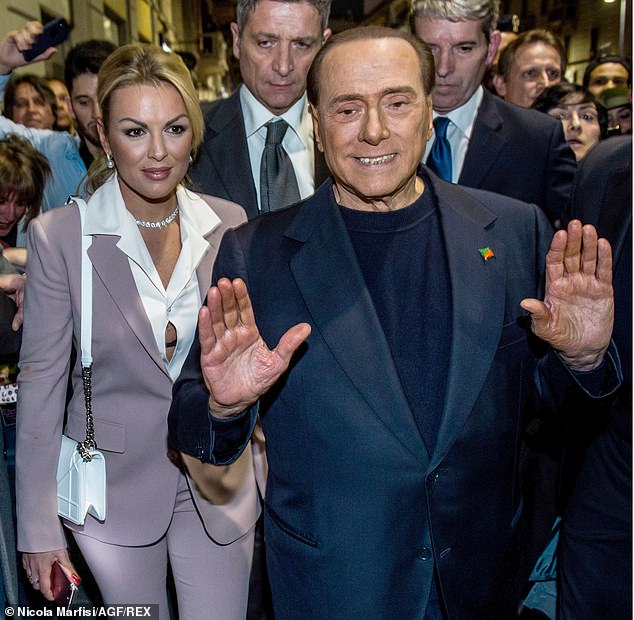 Fascina is Berlusconi’s latest romantic conquest after he broke off his previous relationship with Francesca Pascale (left) in 2020, who at the ripe age of 34 was simply too old for him

The media mogul has also battled a string of health issues in the past two decades.

In late 2006 he was admitted to hospital with a minor heart problem after fainting, and underwent heart surgery in a US hospital in January 2007.

He later had major heart surgery in 2016 and has also survived prostate cancer, which he revealed in 2000 after having endured the disease for three years.

At the time he described his cancer ordeal as ‘a nightmare lasting months’, but said his battle with coronavirus last September had been the ‘most dangerous challenge’ of his life.

Berlusconi most recently underwent a series of tests in late January in Milan, after the centre-right media tycoon took his name out of contention to be Italy´s next president.

Italian media reported that Berlusconi had been hospitalised at San Raffaele hospital, where his physician works, but the spokesman said he had been in and out of the hospital over recent days for a series of exams and a check-up.

Berlusconi recovered from Covid in 2020 and was in and out of the hospital last spring for treatment of complications related to the virus.

Berlusconi reluctantly withdrew his candidacy to succeed Sergio Mattarella as Italy´s head of state, as a result of the health issues.