Beitar Jerusalem La Familia fans hold up a banner before a Uefa play-off against AS Saint-Étienne in 2016. Photograph: Ahmad Gharabli/Getty

An Israeli premier league football team whose most hardcore fans chant “Death to Arabs” faces a crisis of introspection following a landmark deal that saw the club part-sold to an unlikely new owner: an Arab sheikh.

Beitar Jerusalem – the only Israeli team never to have fielded an Arab player – has been grappling with the news that, as of this month, a member of Abu Dhabi’s ruling family, Sheikh Hamad bin Khalifa Al Nahyan, now owns 50% of the club.

“The deal has turned many fans against the club,” said Moar Ifrach, a loyal supporter, as he sat with friends on wooden stands at Beitar’s training pitches on a rainy December day.

While Ifrach backs the deal, which he hopes could give Beitar the success of another club buoyed by Gulf money, Manchester City, he feels that a small cohort of extreme fans will never accept it. “The reputation for racism did not come from nowhere,” he said.

A week before, at the first training session since the purchase was announced, members of the far-right fanbase, known as “La Familia”, were accused of spraying anti-Arab slogans on walls and chanting “fuck bin Khalifa”. Police, some working undercover, said they had arrested four people.

A member of La Familia, who asked not to be quoted or identified, said the sale threatened the Jewishness not only of the club but the entire city of Jerusalem, a city divided between Jews and Arabs but controlled by the Israeli government.

The deal was one of the first fruits of a diplomatic breakthrough between Israel and the United Arab Emirates after the two countries signed agreements to establish formal ties.

Backed by the fervently pro-Israel Trump administration, four Arab states, including Bahrain, Sudan and Morocco, have announced intentions to stop shunning Israel, which has long been isolated in the Middle East for its crippling occupation over the Palestinian territories.

In an announcement posted on their website, Beitar said Sheikh Hamad would invest nearly £70m in the club over the next decade.

Moshe Hogeg, a 39-year-old Israeli cryptocurrency entrepreneur who acquired the team in 2018, said in a message to the Observer that he and Sheikh Hamad, 50, “want to show the world that Jews and Muslims can do beautiful things together and inspire the young generation”.

Still, the deal could be less about coexistence or even about the club itself and more about the UAE gaining political capital with its new ally, Israel, and its backers in Washington.

Among its supporters, Beitar Jerusalem counts swathes of Israel’s political elite, including prime minister Benjamin Netanyahu, while the country’s president, Reuven Rivlin, used to be the club’s manager.

In comments that no doubt pleased the Israeli government, Sheikh Hamad referred to Jerusalem as Israel’s capital, a contentious statement considering that the status of the divided city is a core issue for Palestinians.

While Trump recognises Israel’s claim, most world governments do not because it dismisses Palestinian aspirations that eastern neighbourhoods of the holy city could form their future capital under a peace deal.

Whether the diplomatic detente will lead to a deep change in the club is yet to be seen. Sheikh Hamad has said the club’s doors are open to “all the talent” no matter what race or religion they are.

However, a Nigerian Muslim who joined the team in 2004 soon quit. Years later, when the club signed two Chechen Muslims, the players were verbally abused at games and the club’s offices were later set on fire by fans. 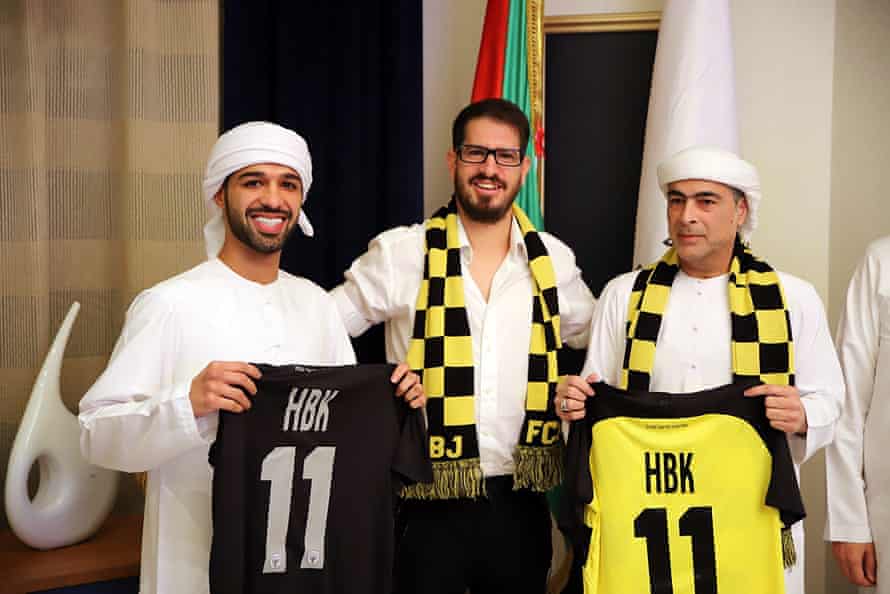