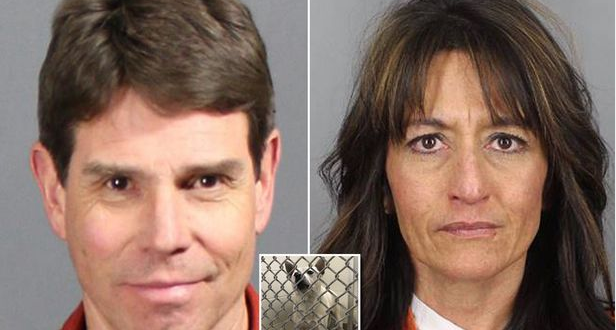 A couple who had vile romps with their dog in a home-made sex chamber are facing jail. Frederick Manzanares, 51, and Janette Solano, 49, carried out the sordid sessions with Akita mix Bubba in a converted motorhome.

Manzanares built a customised bench with red padding for the revolting acts in his garden.

He also used a dog hormone to arouse Bubba.

Police said they found footage of Manzanares, Solano and their pet having sex in Aurora, Colorado.

But the couple also fought over Bubba, according to court files.

And Solano told officers she was “somewhat jealous” of Manzanares’ relationship with the dog.

Bestiality falls under animal cruelty laws in the state and Manzanares has pleaded guilty to two counts.

He could be jailed for up to 18 months on each charge when sentenced next month.

Solano has pleaded guilty to one count.

She negotiated a deferred judgment and sentence and a judge will decide whether to accept the plea deal during a hearing next Monday, reports the Denver Post.

Bubba was seized from Manzanares and is likely to find a new home after a behavioural assessment by the Aurora Animal Shelter.

The pair were arrested in March following a year-long probe after Solano called police to report domestic violence.

She told an officer that she was leaving Manzanares because he pressured her into having sex with Bubba.

She claimed he introduced her to bestiality after she found photos on their shared laptop, says the court papers.