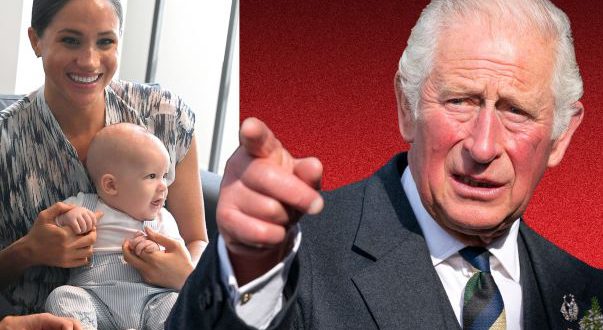 According to the new book "Brothers and Wives," Prince Charles questioned what the complexion of Prince Harry and Meghan Markle's future children might look like.

Book: Prince Charles is the one who asked about baby Archie’s skin tone

A new book claims that Prince Charles speculated about the skin tone of Prince Harry and Meghan Markle’s future children — and unwittingly triggered the rift between the couple and the British royal family.

This is according to a well-placed source in author Christopher Andersen’s book “Brothers And Wives: Inside The Private Lives of William, Kate, Harry and Meghan” (Gallery), out Tuesday.

The source reported that on Nov. 27, 2017 — the same morning the engagement of Prince Harry and Meghan Markle was officially announced — Prince Charles mused to his wife, Camilla, “I wonder what the children will look like?”

The insider said that Camilla was “somewhat taken aback” by the question and replied, “Well, absolutely gorgeous, I’m certain.”

Lowering his voice, Charles asked: “I mean, what do you think their children’s complexion might be?”

Andersen stops short of claiming that Charles is the unnamed “senior royal” whom Harry and Meghan — whose mother is black and father is white  — sensationally accused during their shocking interview with Oprah Winfrey.

In the March broadcast, Meghan said there were “concerns and conversations about how dark [her and Harry’s son, Archie’s] skin might be when he was born … Those were conversations that family had with Harry.”

The author presents the matter as if Charles’ curiosity was seized upon and twisted by scheming courtiers who gave it a racist spin. According to Andersne, by the time the recycled account was heard by Harry and Meghan, it had reached toxic proportions.

Andersen points the finger at  a group of high-level palace advisors known as the “Men in Gray.”

“The question posed by Charles was being echoed in a less innocent way throughout the halls of Buckingham Palace,” Anderson writes, describing the whispers of an elitist clique whom the Brits term “the old boys’ network.” Their gossip focused on how the royals would “look to the rest of the world” once African-American blood became part of the mix.

The book also reveals Harry’s frustration after he complained to Charles who, according to another insider, told the prince he was being “overly sensitive about the matter.”

This unsympathetic view was shared by William, who allegedly called the skin tone comment “tactless” but “not a sign of racism within the family.”

Indeed, after Harry went nuclear with his accusations on TV, the older prince publicly stuck to his guns. “We are very much not a racist family,” he told reporters.

Charles Igbinidu is a Public Relations practitioner in Lagos, Nigeria
@https://twitter.com/ionigeria
Previous Husband charged with murder of his wife – who was found dead TWO days after she signed a $250,000 life insurance policy
Next Virgil Abloh: Louis Vuitton designer who founded fashion label Off-White dies at 41after cardiac angiosarcoma cancer battle