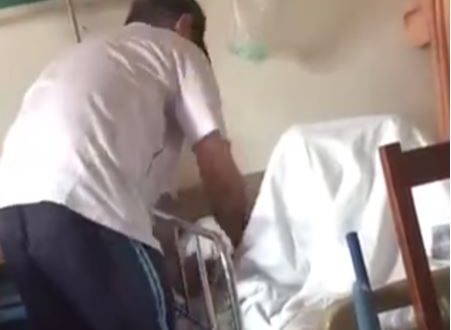 A shocking video has emerged online which shows a cruel son repeatedly slapping his dementia suffering dad because he threw food on the floor.

In the viral video which was taken in a hospital in China, the man can be seen raising his hand to slap his the 86- year-old father severally as he lies helplessly on his sick bed.

Onlookers are said to have reported that the elderly man who suffers from dementia was also kicked in the leg and strapped to the bed by his son.

The son can also be heard on the video saying to his dad: “Why did you cause trouble?”

After the video was first shared on Weibo two days ago, It was reported that the son hit his bedridden father when he comes to pay his daily visit and at some point, he threatened his ill dad by telling him “I’ll punish you properly when we get home”.

According to The Mail Online, the Chinese authorities have detained the man for questioning after the video went viral on social media.

Shanghai-based newspaper The Paper said the man is 86 years old and is known as Mr. Wang. He is thought to have been admitted into the neurology ward of Shanghai No. 4 People’s Hospital in eastern China on August 11.

Watch the disturbing video below…