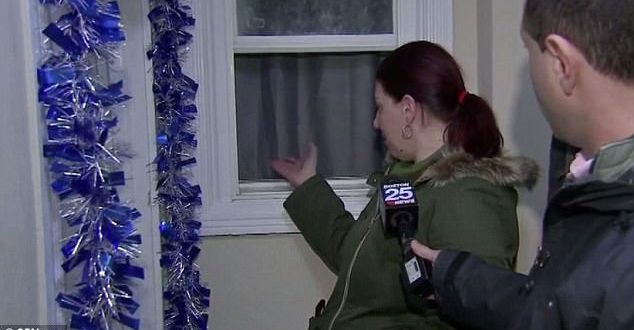 A 15-year-old Massachusetts girl sold drugs to customers from her bedroom window at home – all with her mother’s blessing, police allege.

Investigators in the rural town of Haverhill say they discovered marijuana, cocaine, the opioid fentanyl, and two unlicensed handguns with ammunition.

Police also seized $1,069 in cash which are believed to have been obtained by selling drugs, according to the Eagle Tribune.

The mother, Heather Vittorioso, 37, was arrested and charged with a number of crimes, including possession of a firearm without a license, unlicensed possession of ammunition, reckless endangerment to a child, drug possession, cocaine trafficking, and conspiracy to violate drugs laws.

Heather Vittorioso, 37, was arrested and charged with drug possession, reckless endangerment of a child, and conspiracy to violate drugs laws. She told police she knew her 15-year-old daughter sold weed, but insists she did not know of any other drugs sold.

Vittorioso’s 15-year-old daughter allegedly ran a drug-selling operation in which she took money from customers who knocked on her third-floor bedroom window in exchange for marijuana, cocaine, and fentanyl.

Vittorioso told detectives that she knew her daughter was selling weed, but insisted that she was not aware of the other narcotics.

Neighbors said that they heard people walking up the steps of the multi-family home at all hours of the night, even as late as 3am.

Police said Cameron Dawson, 18, who is said to be dating Vittorioso’s daughter, has also been charged with drug possession and conspiracy to violate drug laws.

Dawson is also said to be living with his girlfriend in her bedroom.

The girl’s father, Demetrius Tragiou, was arrested in September and charged with attempted murder, kidnapping, and assault in connection with a stabbing that took place in Haverhill.

Police also seized $1,069 in cash which are believed to have been obtained by selling drugs.
Neighbors said that they heard people walking up the steps of the multi-family home at all hours of the night, even as late as 3am.

If they post bail, they would be required to abstain from drugs and alcohol. They would also be barred from taking medical marijuana.

The landlord of the third-floor apartment where Vittorioso, her daughter, and Dawson live filed a request for an emergency eviction because of the alleged drug sales.

According to the report, officers executed a search warrant for Vittorioso’s apartment.

They discovered Vittorioso wrapped in a towel. They also found Dawson and Vittorioso’s 15-year-old daughter in bed in a bedroom.

‘We only sell weed,’ the young couple allegedly told police when officers informed them why they were searching the home.

Police also found two boys aged 16 and 18 in the living room of the home. The 16-year-old told police he just spent the night in the home.

The girl’s father, Demetrius Tragiou, was arrested in September and charged with attempted murder, kidnapping, and assault in connection with a stabbing that took place in Haverhill

The 18-year-old was identified as Vittorioso’s nephew. He told police he had just arrived at the home and was planning to go to a court hearing in the case of Demetrius Tragiou and his girlfriend, Lisa Lavoie, who were indicted in a separate stabbing case.

Police found that the 18-year-old boy had $750 in his pockets. The boy said he earned the money working for his father.

Both boys were permitted to leave the apartment.

Police then began to search the bedroom where Dawson and the 15-year-old girl were living.

They say they found four bags of cocaine and a bag of marijuana.

Investigators then said that during the course of their search they learned that the girl sold drugs to customers who walked up the back deck and knocked on the window.

She then would allegedly hand the customers drugs in exchange for cash.

Police also said they found other drug-related paraphernalia including digital scales, a drug ledger, $439 in cash, and a can of Comet cleaner that was used to store drugs.

The ledger is alleged to have included the names of customers as well as the amounts of drugs purchased and the money that was paid for them.

A search of a bedroom where Vittorioso said her 16-year-old son sleeps turned up a backpack that contained two pistols – a silver Bryco .380 and a Heckler & Koch P30L 9-milimeter, according to police.

Investigators said they also found loaded magazines and a box of ammunition.

The backpack is also alleged to have contained 21 grams of cocaine as well as bags of fentanyl.