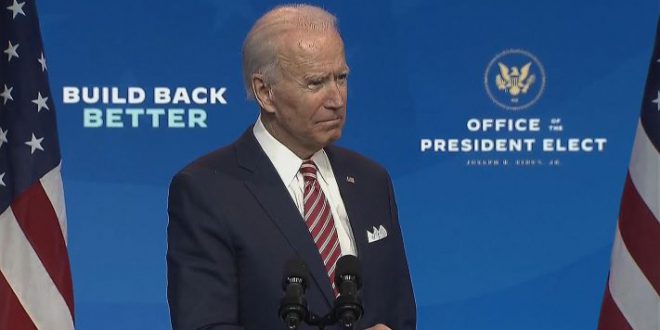 Joe Biden spoke from his makeshift headquarters in Delaware earlier

President-elect Joe Biden said Tuesday that he planned to use his first 100 days in office to take action on an immigration bill, roll back President Trump’s executive orders on the environment and send assistance to state and local governments.

Biden previewed his agenda in an interview with NBC News’s Lester Holt — his first televised interview since he was projected the winner of the presidential election.

“Some of it is going to depend on the kind of cooperation I can or cannot get from the United States Congress,” Biden said of his priorities in his first 100 days.

“I made a commitment, in the first 100 days, I will send an immigration bill to the United States Senate with a pathway to citizenship for over 11 million undocumented people in America,” Biden continued.

Such an immigration reform measure appears unlikely to pass the Senate if it remains under Republican control; the two Senate runoffs in Georgia taking place in January will decide the control of the Senate.

Biden also said he plans to roll back what he described as “damaging executive orders” signed by Trump that have adversely impacted the climate. Biden said that the Environmental Protection Agency (EPA) had been “eviscerated” under the current president.

Biden said he would make sure that state and local governments impacted by the coronavirus pandemic receive “immediate assistance,” though he did not elaborate on how he would do so. Congress has been unable to agree to a deal on the next round of coronavirus stimulus in months of talks with Trump’s White House.

Biden said it would be important to assist communities hardest hit by the pandemic, including minority communities, and “get the kind of help to keep people afloat.”

“This is more than just a financial crisis, it is a crisis that is causing real mental stress for millions of people,” Biden said.

Trump has refused to concede the election but on Monday said he would allow his administration to begin the transition, after the General Services Administration (GSA) “ascertained” Biden as the winner — a step needed to free up federal resources for the transition and allow Biden’s transition team access to federal agencies.

Biden has tapped a handful of people to serve in roles in his White House and on Tuesday introduced members of his national security team and Cabinet at an event in Wilmington.

Biden’s transition team has begun interacting with federal agencies since GSA’s decision, something he has said will be crucial to addressing the coronavirus pandemic. Biden has also engaged with Democratic leaders on Capitol Hill, but his transition team had not disclosed any calls with Republican lawmakers as of Tuesday. Earlier this month, Biden said he expected to speak with Senate Majority Leader Mitch McConnell (R-Ky.) at some point.

Charles Igbinidu is a Public Relations practitioner in Lagos, Nigeria
@https://twitter.com/ionigeria
Previous Trump sends B-52 nuke bombers to Middle East in warning to Iran after being ‘talked out’ of blitzing nuclear plant
Next Meghan, Duchess of Sussex, reveals she had a miscarriage in July, calls for compassion in a polarized world