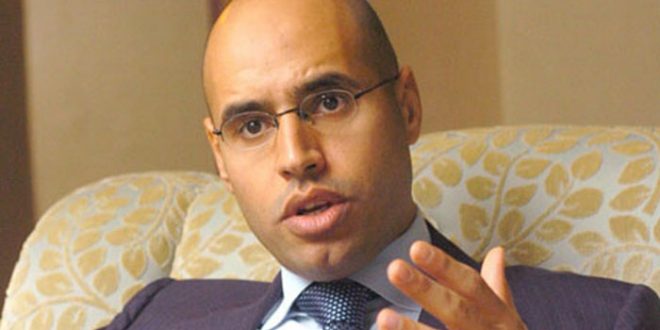 The military and city council of the Libyan city Zintan (180 km southeast Tripoli) on Sunday objected on the release of Saif Al-Islam Gaddafi, who has been freed by the militia detaining him in the city, a statement released by the council said.

The military and city councils of Zintan strongly condemn the statement of the Information Office of Abu-Bakr al-Siddiq Battalion, regarding the illegal release of the detainee Saif al-Islam Gaddafi, which claims that the release was based on the amnesty law,” the statement said.

“This act is collusion and betrayal to the martyrs and a stab to the military establishment that they claim to belong to,” the statement added.

A militia from Zintan called Abu-Bakr al-Siddiq Battalion, which was detaining Gaddafi, announced on Saturday they freed Gaddafi based on an amnesty law issued by the eastern-based parliament in 2015.

Gaddafi was sentenced to death in absentia by the Tripoli appeal court in July 2015 for suppressing the 2011 uprising and killing of protesters.

He is also wanted by the International Criminal Court for crimes against humanity during the uprising. The international court is demanding the Libyan authorities to extradite him for trial.

The national defense and security committee of the eastern-based parliament on Sunday demanded that all detainees of the former regime must not be released without a court verdict.

Moreover, Tripoli Attorney General in-charge, Ibrahim Masoud Ali, on Sunday said that the release of Gaddafi was illegal, and that the “amnesty he needs to be released required a legal waiver from the families of the victims.

Moreover, the suspect is wanted by the International Criminal Court for crimes against humanity.”

Ali said that the office is investigating into those involved in the release of Saif al-Islam Gaddafi.(Xinhua/NA