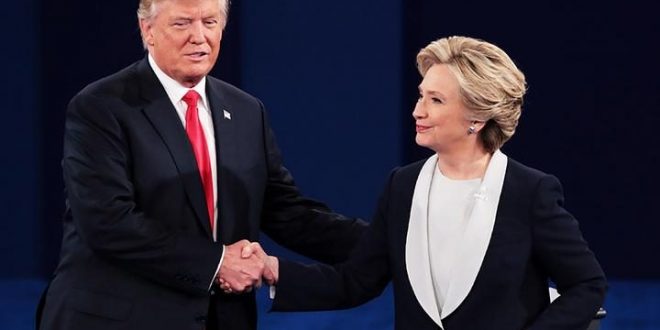 ‘You’d be in jail’, Trump tells Clinton in second dabate

The US presidential candidates have met on stage for a second debate, as the Republican candidate reels from the release of a recording of his lewd talk about groping women.

Sunday’s event at a campus in St Louis, Missouri, followed a town-hall format where the audience – all undecided voters chosen by the the Gallup Organization – asked half of the questions on “topics of public interest”. Other comments came in from social media users.

The candidates smiled at each other but did not shake hands when they were introduced on stage.

The debate started off with a discussion about whether Donald Trump is fit to be commander-in-chief given the way he has spoken about women.

He repeated what he said after a tape of his  sexually charged comments in 2005 surfaced, that it was “locker-room talk” that he was not proud of.

One of the debate moderators, CNN news anchor Anderson Cooper, told Trump: “You bragged that you have sexually assaulted women.”

“I didn’t say that at all,” Trump said, before changing the topic to the Islamic State of the Iraq and Levant group.

“Yes, I’m very embarrassed by it. I hate it, but it’s locker-room talk, and it’s one of those things. I will knock the hell out of ISIS. We’re gonna defeat ISIS. … We should get on to much more important things.”

Pressed by Cooper – “Have you ever done those things?” – Trump replied: “No, I have not.”

Trump then hit back at Clinton by saying that “nobody in the history of politics in this country has been so abusive to women” as her husband, former president Bill Clinton.

Trump had said there is “zero chance” he will drop out of the race, amid growing pressure from within the Republican Party for him to be replaced by another candidate. His running mate, Mike Pence has said he “cannot defend” Trump.

Later in the debate, Trump threatened to prosecute Clinton over her email use as secretary of state if he were elected president, warning her she would “be in jail” under his watch.

“If I win, I’m going to instruct the attorney general to get a special prosecutor to look into your situation because there’s never been so many lies, so much deception,” Trump told his Democratic rival.

A question from a Muslim woman in the audience then brought the discussion towards Islamophobia and Trump’s previous statements about enforcing a ban on Muslims entering the US.

He said his policy on Muslim immigration has “morphed” into “extreme vetting”, while also saying that Clinton cannot fight terrorism because she cannot say “the name radical Islamic terror”.

Throughout the debate, Trump tried to speak over the moderators and accused them of giving more time to Clinton.

Al Jazeera’s Alan Fisher said that while Trump was getting a public bashing over his comments about women, Clinton also did not have an easy night as she came under pressure on some key issues, such as deleted emails.

Fisher also noted that Trump rarely answered the questions in the debate.

“Trump did what Trump does. He took the questions and turned them into talking points he knows appeal to his supporters,” our correspondent said.

“He knows that if he talks about trade, or ISIL, if he continues to say that Clinton has been a politician for 30 years and achieved noting, he will do well with his support base.

“He was more on message, not as riled and upset as in the first debate. He was really just appealing to his base. But if he is to win this election, he has to broaden his base.”

The last question from a member of the audience was whether the candidates could mention one thing about the other that they respect.

Clinton’s answer was that she respects Trump’s children.

“They are incredibly able and devoted and I think that says a lot about Donald,” she said.

Trump said about Clinton that she “doesn’t quit, she doesn’t give up. She’s a fighter.”