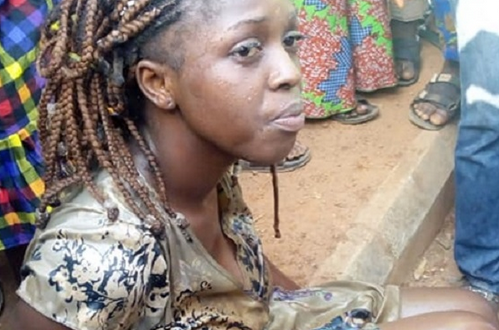 Yahoo Plus: Lady Allegedly Runs Mad After Being Dropped From Lexus SUV (Video)

A young lady said to be a student of a tertiary institution in Ogun State has reportedly gone insane after alighting from a Lexus SUV driven by some men suspected to be ritualists popularly called Yahoo Plus.

According to eyewitnesses, the incident happened in a community in the Ijebu-Ode axis of the state during the week.

It was gathered that the lady was in the vehicle with the unidentified men who drove to the spot and stopped for her to get down but the moment she alighted from the vehicle and the men drove off, the lady started acting in a funny manner, exhibiting signs of madness.

In a video that has since gone viral on social media, the young lady is seen covered in dirt and speaking incoherently.

A Twitter user with the handle @honey_blackie who shared the video wrote:

“When they say stay with your broke boyfriend, ladies won’t listen…Guys are desperate ladies beware…This happened today at Ijebu-ode after she got down from a Lexus jeep.”

I just saw a video of a very young beautiful girl. According to what I saw, she’s at Ijebu Ode. Unfortunately, she’s mad and has been used by ritualist or yahoo boys.

“I just saw a video of a very young beautiful girl. According to what I saw, she’s at Ijebu Ode. Unfortunately, she’s m

ad and has been used by ritualist or Yahoo boys.

A few weeks back, I tweeted about a young girl I saw at Jakande roundabout which was also mad.”

Another account has it that the lady has been identified simply as Blessing and a student of the Adekunle Ajasin University, Akungba, Ondo State, andmust have been used for money rituals by the men who dropped her off at the spot where she was found. 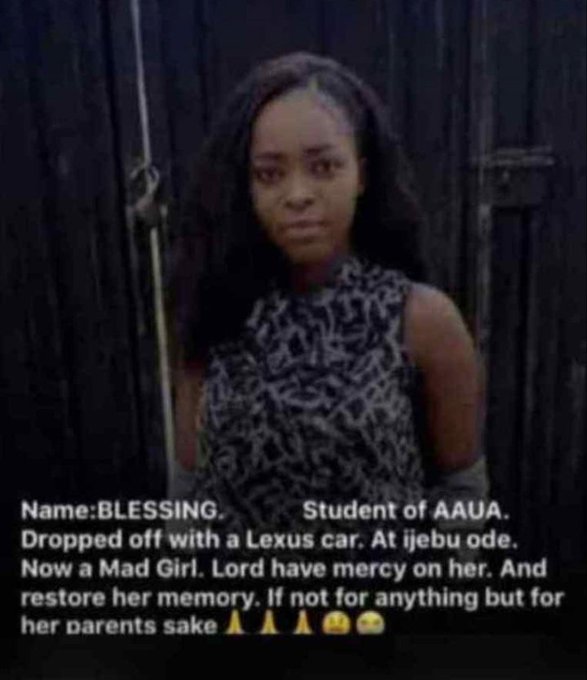 She was later tied up by people around after taking her public displays to another level and causing a disturbance.