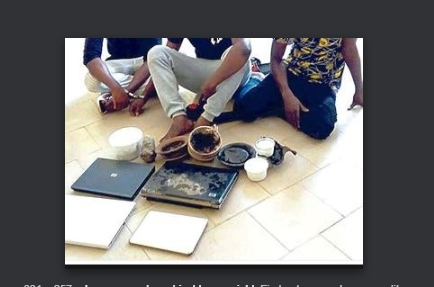 Report has it that a suspected internet fraudster popularly known as ‘Yahoo Boy’ caused a huge scene on Thursday in Sapele, Delta state.

It was gathered that the Yahoo Boy stormed Winners Chapel along Ogizien Street, off MTN road in Okirighwre area – during the Shiloh programme yesterday to test his new charm.

According to journalist Sapele Oghenek, the Yahoo Boy stormed the church with two white pigeons and decided to touch a young boy to check the effectiveness of the charm.

An alarm was immediately raised after church members noticed what was going on as they alerted some vigilante members.

When the young man was quizzed why he carried out such act, he allegedly confessed that he did a charm for money in Abraka where Delta State University (DELSU) is located and decided to test the charm on the small boy.

The suspect was later handed over to the police for further investigation.