Xueli Abbing: Abandoned by parents due to albinism, now a Vogue model

Charles Igbinidu May 2, 2021 Life and Style Leave a comment

When Xueli was a baby her parents left her on the ground outside an orphanage. In China, albinism is seen by some as a curse.

The rare genetic condition causes a lack of pigment which makes Xueli’s skin and hair very pale and also makes her extremely sensitive to sunlight.

But looking different led Xueli to her modelling career. Now aged 16, she has graced the pages of Vogue and fronted campaigns for top designers.

This is her story as told to Jennifer Meierhans. 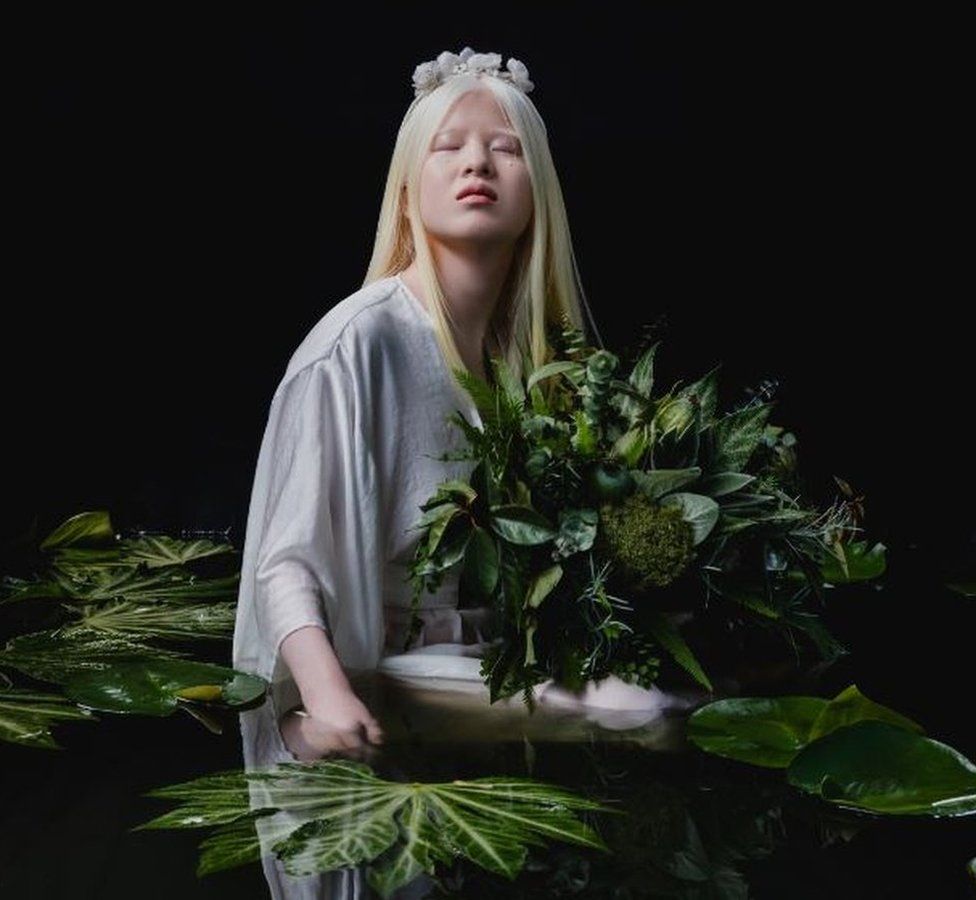 The staff at the orphanage named me Xue Li. Xue means snow and Li means beautiful. I was adopted when I was three and went to live with my mum and sister in the Netherlands. My mother said she could not think of a more perfect name and she thought it was important to keep a reference to my Chinese roots.

At the time I was born in China, the government enforced a one-child policy on families. You were extremely unlucky if you had a child with albinism. Some children, like me, were abandoned, others were locked away or if they did go to school their hair was painted black.

But in some countries in Africa, they are hunted, their limbs may be cut off or they are killed. Witch doctors use their bones to make medicines as people believe these can cure diseases but of course, this is not true, these beliefs are myths. I’m lucky I was only abandoned.

My birth parents didn’t leave any information about me so I don’t know when my birthday is. But about a year ago, I had an X-ray of my hand to get a more accurate idea of age and the doctors thought 15 was about right.

I fell into modelling by chance when I was 11. My mum was in contact with a designer who was originally from Hong Kong. She has a son with a cleft lip and she decided that she wanted to design very fancy clothes for him so people would not always just stare at his mouth. She called the campaign “perfect imperfections” and asked if I wanted to join her fashion show in Hong Kong. That was an amazing experience.

After that, I was invited on a couple of photoshoots and one of them was for Brock Elbank at his studio in London. He published my portrait on Instagram. Zebedee Talent modelling agency got in touch and asked if I wanted to join them in their mission to get people with disabilities represented in the fashion industry.

One of the pictures Brock shot of me was featured in Vogue Italia’s June 2019 edition with Lana del Rey on the cover. At the time, I didn’t know what an important magazine it was and it took me a while to realise why people got so excited about it.

In modelling, looking different is a blessing, not a curse and it gives me a platform to raise awareness of albinism.

The Kurt Geiger campaign is a really great example of how they let me show my difference. They allowed me to style and direct the shoot with my sister because coronavirus restrictions meant the photographer could not be in the studio. It meant I could express myself in whatever way I wanted and I’m really proud of the results.

There are still models who are like eight foot two and skinny but now people with disabilities or differences are featured more in the media and this is great – but it should be normal. Models with albinism often get stereotyped in shoots to depict angels or ghosts and it makes me sad. Especially because it perpetuates those beliefs that endanger the lives of children with albinism in countries such as Tanzania and Malawi.

My albinism means I only have eight to 10 per cent vision and I can’t look directly at light as it hurts my eyes. Sometimes if it’s too bright on a shoot I will say “May I close my eyes or can you make the light softer?” Or I’ll say “OK, you can do three pictures with my eyes open with the flash and no more.”

At first, they might think it’s hard but when they take the first picture they are like “Wow” and they are really happy with the results. My management say to clients “If you can’t arrange that you can’t have Xueli.” It’s important to them that I feel comfortable.

People tell me my visual I’mpairment gives me a different perspective and I see details that others do not observe. It also makes me care less about the traditional view of beauty. Maybe because I cannot see everything properly I focus more on people’s voices and what they have to say. So their inner beauty is more important to me.

I love modelling because I like meeting new people, practising my English and seeing that people are happy with my pictures. I want to use modelling to talk about albinism and say it’s a genetic disorder, it’s not a curse. The way to talk about it is to say “a person with albinism” because being “an albino” sounds as if it defines who you are.

People say to me that I have to accept things in my past but I think that’s not the case. I believe you need to see what’s happened and understand why but not accept it. I’m not going to accept that children are being murdered because of their albinism. I want to change the world.

I want other children with albinism – or any form of disability or difference – to know they can do and be anything they want. For me, I’m different in some ways but the same in others. I love sport and climbing and I can do it as well as anyone else. People might say you can’t do things but you can, just try.