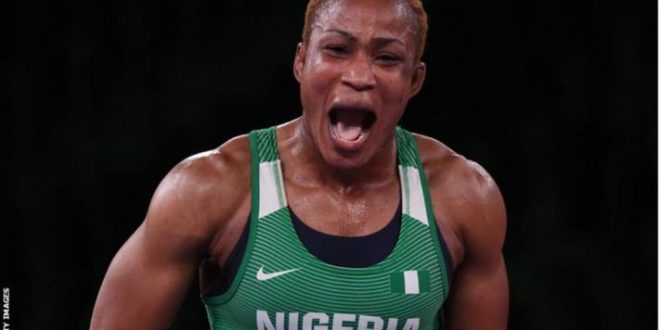 Win or loss, Oborududu will return home with either a gold or silver medal.

Oborududu beat Mongolia’s Battsetseg Soronzonbold in the semi-finals of the women’s 68kg freestyle event to secure at least a silver medal, the first for her country at the Tokyo Games.

She will face Tamyra Marianna Stock Mensah in Tuesday’s to decide who wins gold. It will also be Nigeria’s first ever Olmypic wrestling medal.

Namibian sprinter Christine Mboma twice broke Allyson Felix’s under-20 world and Olympic record as she reached Tuesday’s final of the women’s 200m on day ten of the Tokyo Olympics.

Her compatriot Beatrice Masilingi twice set a personal best to progress as well, both athletes were forced to withdraw from their preferred 400m heats when they were ruled in July to have high levels of testosterone.

Ivory Coast’s Marie-Josee Ta Lou will have another chance to win an Olympic medal as she also reached the 200m final.
Share