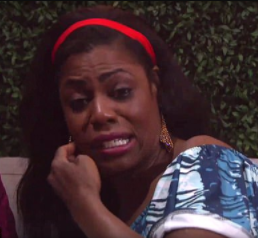 During the 2016 US election, Omarosa Manigault-Newman was among those at the forefront campaigning for Donald Trump. She recently got fired and promised to tell all when the time was right. It seems the time has come because she’s talking already.

The former White House adviser is now starring in the reality show ‘Celebrity Big Brother’ and since this season of the show debuted on Wednesday, Omarosa has been making some revelations. The former ‘Apprentice’ star was in tears as she made shocking remarks about President Trump to her housemates.

She told her fellow housemates that she “would never vote for him again in a million years.” The former self-proclaimed “Trumplican”-turned-Trump-hater was heard telling fellow Celebrity Big Brother housemate, Keshia Knight Pulliam – who played the lovable Rudy on the hit family sitcom ‘The Cosby Show’ – that Pulliam’s relationship to Bill Cosby is similar to her and Trump’s.

Omarosa told Pulliam: “Only you know your interwork and relationship to Mr Cosby. That’s the same thing with me and Mr Trump.”

The former political aide said: “It’s not something that can be minimized.”

Omarosa continued: “but you don’t see the similarities?”

And Pulliam agreed, saying: “It’s a different situation because this man is running our country and being a voice of a whole country of people.”

The ex-communications director for the administration’s Office of Public Liaison later says that with Trump at the helm, America “is going to not be okay. It’s not… It’s so bad.”

Omarosa’s anti-Trump rant further included a claim that she “was haunted by tweets every single day, like, ‘What is he going to tweet next?’ “. With hushed tones, she said that she did her best to be a voice of reason, advising Trump that his take-no-prisoners social media style wasn’t helping him.

“I tried to be that person, and then all of the people around him attacked me,” she added, singling out Ivanka Trump and her husband, Jared Kushner, for the blame.

When asked if there’s anyone left at the White House who has the power to intervene, she shrugged.

Omarosa was fired from her White House job in December.