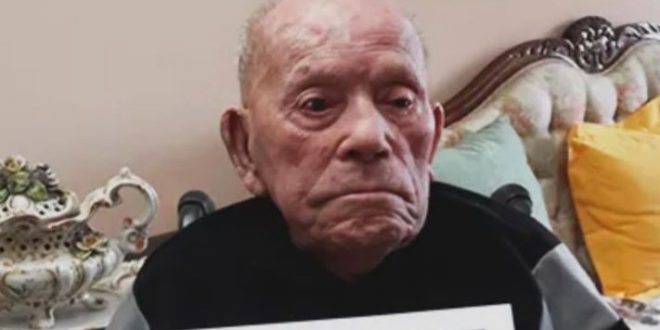 Father-of-eight Saturnino de la Fuente Garcia – who was officially named the world’s oldest man by the Guinness Book of Records in September – died at his home in Leon, Spain, just weeks from turning 113

The world’s oldest man has died less than a month short of his 113th birthday.

Father-of-eight Saturnino de la Fuente Garcia passed away at his home in the northern Spanish city of Leon on Tuesday morning.

The retired shoemaker was due to celebrate his birthday with his family on February 8, the date he claimed to have been born although official records record his birth three days later.

Saturnino earned his place as the world’s oldest man in the Guinness Book of Records last September when he reached the ripe old age of 112 years and 211 days.

As well as fathering a large family with his wife Antonina Barrio, he had 14 grandchildren and 22 great-grandchildren. One of the couple’s eight children, the only boy, died when he was still young.

Saturnino was due to celebrate his birthday with his family on February 8 ( Image: guinness world records)

Quizzed about the secret of his longevity, Saturnino responded: “A quiet life and not hurting anyone.”

Passionate football fan Saturnino was remembered by his local club Cultural y Deportivo Leonesa, which tweeted: “We’re saddened by the death of Saturnino de la Fuente, the oldest man in the world, and will remember him with great affection.

“We share the pain of his loss and we would like to express our condolences to his family and friends.”

Guinness World Records added: “We’re saddened to hear that Saturnino de la Fuente Garcia has passed away at his house at the age of 112 years and 341 days.

“The news has been confirmed by Senior Gerontology Consultant Robert Young, who also helped confirm Saturnino’s record as the oldest living male in September 2021.

“The record holder was announced as the oldest man living at exactly 112 years and 211 days.”

Saturnino established his flourishing shoemaking business in a Leon neighbourhood called Puente Castro after avoiding being enlisted into the Spanish Civil War because at less than five feet he was too short.

He ended up making boots for the Spanish Army.

Charles Igbinidu is a Public Relations practitioner in Lagos, Nigeria
@https://twitter.com/ionigeria
Previous Mourinho could return to the Premier League to take vacant Everton job
Next Army promises to respond after studying judgement on N1billion compensation to Nnamdi Kanu