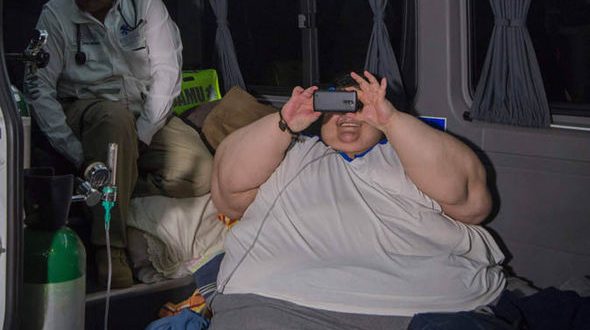 THE world’s fattest man has been taken to hospital for surgery to help him lose weight and walk again for the first time in six years.

He has spent most of the last 15 years of his life in a small bed at his home in the central Mexican city of Aguascalientes.

He was chubby at school but his weight ballooned after a bout of pneumonia and a crippling traffic accident he suffered as a teenager which left him bed-ridden for more than a year.

He has put on a staggering 15 stone in the past four months alone since making a public appeal for cash help to allow him to restart a special diet.

Surgeon Jose Antonio Castaneda Cruz, part of the medical team which will now take charge of Mr Franco at Jardines Hospital in Guadalajara, is planning to reduce his weight by around seven stone before an op.

His burgeoning weight has put at risk the record of Mexican Manuel Uribe, who became the world’s heaviest man after reaching a peak weight of 94 stone before his death aged 48 in May 2014.

Special equipment was needed to move Juan Pedro from his home with the aid of oxygen tanks to a hospital in Guadalajara 100 miles away where he is due to go on a special diet to help him lose weight over a six-month period before surgery.

The Mexican, an accomplished guitar player, appealed for help in July when he weighed just over 60 stone, revealing he hadn’t left his box room for six years and feared he would die after having to quit a special diet which his pensioner parents couldn’t afford.