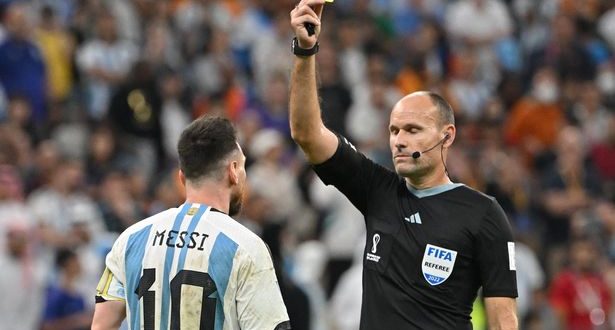 The Spaniard was put in charge for the South American’s quarter-final showdown with the Netherlands last week. Despite Argentina running out victorious on penalties, there were huge complaints sent the way of the official.

In what was a bad-tempered clash, Lahoz issued an eye-watering 17 yellow cards with Dutch defender Denzel Dumfries also receiving his marching orders despite the game having already finished. Meanwhile, two-goal hero Wout Weghorst was also issued with a booking even before he took to the pitch.

Messi, the scorer of Argentina’s second goal in the game, aired his complaints about the official’s performance. He told TyC Sports “This match shouldn’t have ended as it did.

“I don’t want to talk about the referee because they sanction you. But people saw what happened. We were afraid before the match because we knew how he was and I think FIFA has to review this. You can’t put a referee like him for these matches.”

Meanwhile, Aston Villa goalkeeper Emiliano Martinez ruthlessly criticised Lahoz for his performance. He said: “The ref gave everything to them [Netherlands]. It all turned upside down.

“He gave 10 minutes extra time for no reason. He just wanted them to score. That referee is crazy. Arrogant. You say something to him and he talks back to you. It’s crazy.

“Because Spain were eliminated, he wanted to eliminate us. He is the worst referee at the World Cup. Hopefully we won’t have him again – he’s useless.”

Now, it has emerged that Lahoz’s display has spelt the end of his World Cup campaign .The 45-year-old will not oversee any more matches at the tournament and is expected to return home to Spain.

Lahoz is not the only official to have been questioned for his performances at the World Cup over the last month. Brazilian referee Wilton Sampaio was the target of severe criticism for his showing during England’s quarter-final defeat to France.

Numerous members of the Three Lions’ squad slammed him during their post-match interviews, whilst former Manchester United defender Gary Neville branded him as an “absolute joke”.

Speaking to ITV, he said: “The referee had a nightmare game, an absolute joke of a referee. I’m not saying that was all down to England’s defeat because that’s making excuses. He was just a bad referee, rank bad.”

Charles Igbinidu is a Public Relations practitioner in Lagos, Nigeria
@https://twitter.com/ionigeria
Previous World Cup 2022: Argentina go through on penalties as Brazil’s manager Tite quits after Croatia loss
Next We Have Recovered Over N30bn From Suspended AGF – EFCC Chairman