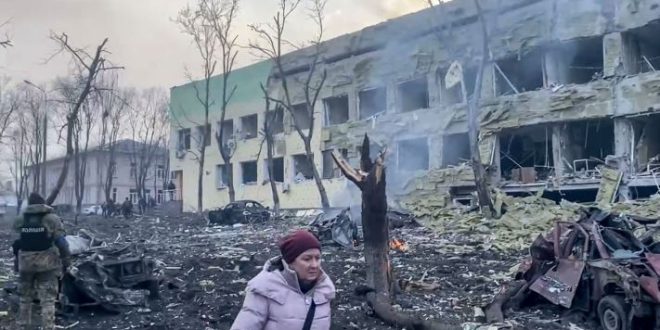 The president tweeted that children were among people 'under the wreckage'. Pic: AP

At least seventeen people were wounded after a Russian airstrike destroyed a maternity hospital in the besieged city of Mariupol, Ukraine has claimed.

President Volodymyr Zelenskyy claimed children were left buried under the rubble after the strike on Wednesday afternoon and branded the attack an “atrocity”.

The airstrike was carried out during an agreed ceasefire period that was meant to allow the evacuation of civilians from the besieged southern city, said regional governor Pavlo Kyrylenko.

He said on a Facebook post: “So far there are 17 wounded personnel of the hospital” adding that “so far no kids were wounded” and there have been “no deaths”.

Horror footage showed the charred remains of the hospital with wounded staff and patients being rushed out of the building into a devastating scene of burning cars and smouldering rubble.

The video showed holes where windows should have been in what appeared to be a badly damaged three-storey building at the hospital.

A wounded mum-to-be, who was led out of the wrecked unit, wrapped in a duvet to keep warm in the freezing temperatures.

Rescuers were last night clawing through the rubble looking for other survivors.

The city council accused brutal Russian forces of “dropping several bombs” on the hospital with footage showing a huge crater outside one of the buildings.

Mariupol city council said: “The Russian occupying forces have dropped several bombs on the children’s hospital. The destruction is colossal.”

Zelenskyy shared footage of the harrowing scene inside the building and said: “Direct strike of Russian troops at the maternity hospital. People, children are under the wreckage. Atrocity!

“How much longer will the world be an accomplice ignoring terror? Close the sky right now! Stop the killings! You have power but you seem to be losing humanity.”

The Ukraine president has repeatedly urged the US and other Nato nations to impose a no-fly zone to protect his citizens against bombing, rocket attacks and advancing Russian troops.

But Nato members warned a no-fly zone could lead to direct clashes between Russian and Nato forces.

Boris Johnson slammed the “depraved” airstrike in Mariupol which targeted “vulnerable and defenceless” mums and babies.

The PM said: “There are few things more depraved than targeting the vulnerable and defenceless.

“The UK is exploring more support for Ukraine to defend against airstrikes and we will hold Putin to account for his terrible crimes.”

Ukrainian MP Dmytro Gurin claimed “many” women had been killed or wounded in the Russian bombardment.

One  said: “We’ve got good reason to be concerned about possible use of non-conventional weapons.

“Partly because we’ve seen what has happened in other theatres for example in Syria… so it’s a serious concern for us.”

Days of shelling in Mariupol have cut residents off from the outside world and forced them to scavenge for food and water.

Mariupol’s deputy mayor said 1,170 civilians have been killed in the city since the start of the Russian invasion.

Serhiy Orlov was quoted as saying: “At least 1,170 people have been killed and 47 were buried in a mass grave today.

“People are without water, heat, electricity, gas, residents are melting snow to drink.”

Yesterday, a girl, eight, died of dehydration after Russian attacks left her without access to water, power, or heating.

And a Red Cross aid mission was allegedly hit by a Russian bomb in the city, amid reports victims of shelling are being buried in mass graves.

Two bombs were dropped in the attack on the International and the Ukrainian Committees of the Red Cross, according to unverified reports.

The Red Cross described conditions inside the city “apocalyptic”, with residents sheltering underground from relentless bombardment.

Despite Russian and Ukrainian officials agreeing to establish “humanitarian corridors” to allow civilians out of some cities, Russia has been accused of shelling evacuation routes.

The Ukrainian defence ministry said Russian forces “launched an attack right at the humanitarian corridor” and “did not let children, women and elderly people leave the city”.

Thousands of people are thought to have been killed in Ukraine – both civilians and soldiers – in two weeks of fighting since Putin’s forces stormed the country.

The UN said more than two million people have now fled the country – the biggest exodus of refugees in Europe since the end of World War Two.

Authorities announced a new ceasefire today to allow civilians to escape from towns around Kyiv, as well as Mariupol, Enerhodar, Volnovakha, Izyum and Sumy.

US defence officials estimate that Russia has fired more than 600 missiles from inside or at Ukraine since February 24.

It comes as Russia’s stranded troops are facing freezing to death in their tanks as Putin’s military becomes bogged down in the mud and an unwinnable war in Ukraine.

A 40-mile long convoy of tanks and armoured vehicles remains trapped outside Kyiv – more than a week after launching their assault on the Ukrainian capital.

As a sudden cold snap sends temperatures in Eastern Europe plunging to -10C overnight – or -20C including windchill – Russian troops are trapped in what one ex-soldier called “40-ton iron freezers”.

Icy conditions are also set to make life even harder for Putin‘s invaders, who have been stuck around 20 miles from Kyiv for days amid mechanical problems, fuel supply issues, and solid Ukrainian resistance.

Former British Army Major Kevin Price told the Mail Online that Russia’s tanks will become nothing more than “40-ton freezers” as temperatures plummet, and said that the bitter conditions will further dampen the morale of the Russian military.

Already, reports are coming in of demoralised Russian troops complaining about the war in intercepted phone calls to comrades and loved ones.

In the calls, Putin’s troops claim the war could drag on for “months” and say they are being “massacred” in Ukraine.

Russian soldiers are reportedly “deserting their posts” after “large-scale losses”, including the deaths of top generals.

“They are meeting a very stiff and determined Ukrainian resistance. And we still maintain that they are several days behind what they probably thought they were going to be in terms of their progress.”

Today, President Zelenskyy warned the international community would be responsible for a mass “humanitarian catastrophe” if it doesn’t agree to a no-fly zone.

He also warned the country is at maximum threat level.

“Russia uses missiles, aircraft and helicopters against us, against civilians, against our cities, against our infrastructure. It is the humanitarian duty of the world to respond,” he said in his daily televised address.

He said Ukraine has shown in the past two weeks that they will never give in.

Charles Igbinidu is a Public Relations practitioner in Lagos, Nigeria
@https://twitter.com/ionigeria
Previous British property developer Nick Candy to submit a £2.5billion bid to buy Chelsea
Next Trump asks for donations to build ‘new Trump Force One’ as private plane made an emergency landing 20 minutes after take-off