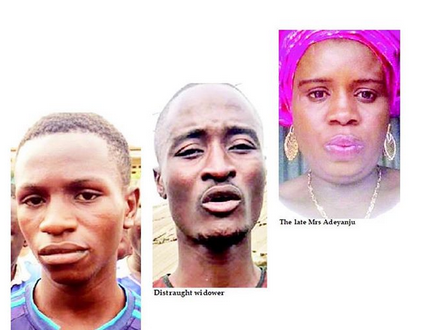 A 42-year-old woman has died of shock after her son’s arrest by some Federal Special Anti-Robbery Squad (FSARS) operatives.
According to a report , Asiata Adeyanju slumped and died close to her 9, Ajenifuja Street, Ilupeju, Lagos home on Wednesday night. She was said to be hypertensive.

It was gathered that the SARS operatives from Ipakodo Division in Ikorodu, who have been allegedly picking people up at random in the area in the last two weeks, arrested Muiz, the deceased’s 17-year-old son, when he was about switching on the generator in front of their home.

The operatives allegedly slapped Muiz and hurled him into an unmarked van. A neighbour simply identified as Emmanuel, a teacher, was said to have been slapped by the operatives when he tried to stop them from taking the boy away. .

It was gathered that the late Mrs Adeyanju ran out with only her wrapper and chased the police van. She slumped at a spot and died while being rushed to a nearby hospital.

Her husband, Musendiku Adeyanju, later met with the operatives at Ilupeju Junction, off Adesiyan Street, to secure his son’s release. It was gathered that the operatives hurriedly left the area when they learnt of Muiz’s mother’s death. None of those arrested was taken to the police station.

They allegedly secured their release at a price. There was wailing on Ajenifuja Street yesterday when Mrs Adeyanju’s body was brought back home. Sympathisers rained curses on the operatives, describing FSARS as “evil organisation”.

Some residents complained that the operatives had been coming to the area for “illegal raids and indiscriminate arrests”. At her wife’s funeral Mr Adeyanju, 43, was all tears.

He described his wife’s death as “devastating agony”, wondering what his son’s offence was to warrant his arrest by the SARS.