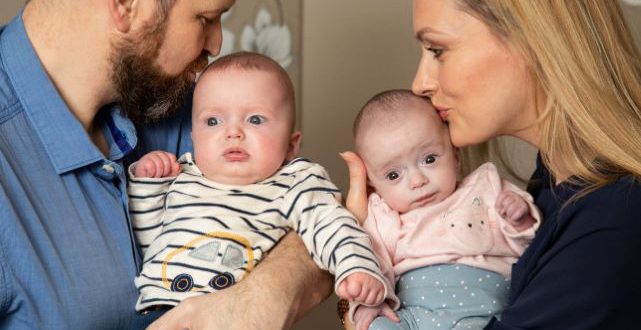 Noah and Rosalie might be twins as they are born on the same day – but they were conceived three weeks apart.

Mum Rebecca Roberts, 39, fell pregnant with her daughter, Rosalie, when she was already carrying her son, Noah. Described as a ‘superfetation’, it is a rare event where another egg is released and fertilised when someone is already pregnant.

Thought to affect around 0.3% of women, often the second baby dies during pregnancy and only one of the babies is born.

Rebecca and partner Rhys Weaver, 43, are some of the only parents in the world who have been able to welcome both babies born through superfetation.

Because of her tiny size, Rosalie was taken to the bigger St Michael’s Hospital in Bristol, where she stayed for 95 days to grow stronger.

Noah was well enough to stay in Bath but needed treatment in hospital for three weeks and three days – before going home to meet his 14-year-old sister Summer.

Mum-of-three Rebecca said: ‘We feel really lucky, it’s so lucky to have twins anyway but to have such special twins, it’s so lovely, it’s wonderful, they are a blessing.’

Rebecca had two early scans before the usual 12-week mark and had only seen one baby so was shocked when the third scan showed twins.

She said: ‘I had two previous scans which showed Noah, she must have just been embedded. ‘I had just been having a conversation with the sonographer about my previous scan so she was aware that I was only having one baby so she was so silent, I thought something awful had happened because she didn’t say anything.

‘Then she looked at me and said did you know you’re expecting twins.

‘My heart skipped a beat, I actually said to her is this real? ‘

She couldn’t get any measurements of the little baby because she was so small so she got me to go out into the car park and jump around to try and get the baby to move a bit.

’ Due to coronavirus restrictions, Rhys was waiting outside and he was stunned when he heard the news.

Rebecca said: ‘He didn’t believe me until he looked at the pictures and said nothing.

‘He saw twin one and twin two on the picture and he was just as shocked as me.

Rebecca’s consultant tried to work out why the mystery twin appeared after her 12-week-scan, concluding a rare superfetation event had happened.

As the twins are from completely different eggs, released at different times, they are non-identical as identical twins happen when one egg splits.

Rebecca said: ‘I didn’t even know that existed.

‘Even my midwife found it baffling.

‘It was a massive shock finding out about the twins so we waited until they were born to find out about their gender.’

Rebecca gave birth via cesarean section to the babies just two minutes apart -Noah at 12:46 pm and Rosalie at 12.48 pm.

She said: ‘It was such a relief as we were always worried that something terrible would happen to Rosalie as she was so much smaller.

‘I was really really nervous during the birth but when they were born they showed them too which was amazing.

‘After they sewed me up they took to me to NICU to see them which was lovely. 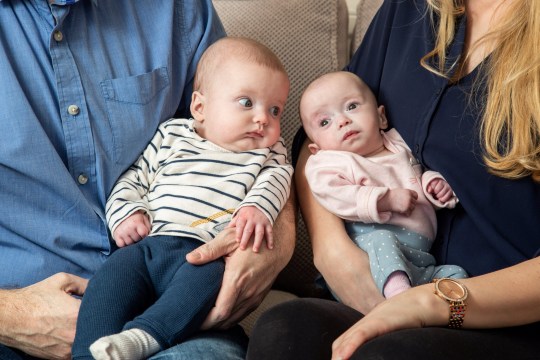 They were just beautiful, especially Rosalie she was so small her nappy came up to her armpits.’

Now the twins are just over six months old and doing well. Rebecca documents their progress at home on her Instagram @roberts.supertwins

Rebecca said: ‘It was amazing to finally have them all home.