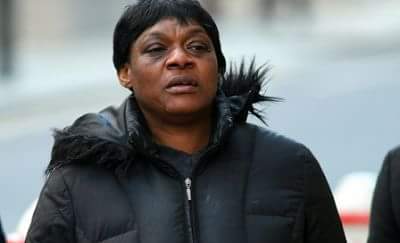 Woman Who Caused Death Of Her 18-Months Old Baby, Given 2 Yr Prison Sentence

A Nigerian mother who was convicted of causing the death of her baby girl was given a two year suspended prison sentence at the Old Bailey on Friday, 19 January.

Chidinma Okwudili Anya, 45, was driving her elder child, aged three at the time, and 18-month-old Eugenia, when her car was involved in a collision with a van on King’s Highway, Greenwich on 11 November 2015. Eugenie died in hospital on the evening of 22 November 2015.

Police were called to the location of the crash at 12:21hrs on 11 November 2015, along with London Ambulance Service, London’s Air Ambulance and the London Fire Brigade.
Anya and both children were taken to hospital, as well as the van driver, for treatment. The van driver required a hospital operation and a lengthy spell for recovery.

Anya was subsequently interviewed under caution and summonsed to Bromley Magistrates’ Court on 31 July 2017. She then attended the Old Bailey on 29 August, 2017, where she pleaded guilty to the two offences.

The court heard that Anya had epilepsy and as such was under obligation to consult with her doctor and the DVLA before driving. However she had assured the DVLA that she had no medical conditions. It also emerged that Eugenia had not been put in a seat deemed suitable for a baby – but one designed for an older, much bigger child.

“The consequence of the crash was catastrophic.

“Members of the public tried to help and your two children were removed from the back of the car. You were seen and heard to be screaming you were injured and were crying out about your own condition and were also shouting that you wanted to die.

“Your own 18-month-old daughter died in hospital just a few days after the crash from her injuries. A driving expert has concluded that there were no faults in either vehicle involved in the crash and neither was there any event that could have contributed to it.

“He said the crash was due to driver input, whether initially by error or as a result of a medical episode. Your seizures were not fully controlled and the medication which you should have taken regularly was some what intermittent and unreliable.

“A prescription for phenytoinsodium was found in the back of your car and was uncollected from September. You were well aware of your condition and that it was not fully controllable.

“I am quite satisfied that you have been told by at least one neurologist that you must not drive.”

The judge also imposed a rehabilitation requirement on Anya lasting twenty days from 12 January, and she was put under a tagged curfew for two months that runs between 21:00hrs and 06:00hrs.

She was also disqualified from driving for ten years, and will need to undertake an extended driving test were she ever to reapply to get her licence back.

Judge Poulet said she considered the loss of little Eugenie, Anya’s own injuries and the deep remorse she has suffered since the crash when handing down the sentence.

“There is substantial mitigation that can be considered at this stage. I take into account the loss of your own 18-month-old daughter, the serious injuries to yourself, your increased number and gravity of your seizures since and your deep remorse and otherwise good character and finally the very long time it has taken for you to be charged with this offence. You have three other children who have lost their sister who would be devastated if you were sentenced into custody.”

She also criticised the “long delay” by the CPS which had the case file for 18 months after the fatal crash before bringing charges against the mum.

Anya was supported by the father of her children Bernard Anigbo, who sat in the public gallery throughout the sentencing hearing.

A statement read by Anya’s counsel stated she was “selfless, loving and caring and puts the needs of others before herself.”

The officer who led the investigation for the Serious Collision Investigation Unit, DC Suzanne Gates, said:

“This is a tragic case where a mother’s actions have led to the death of her young baby and put into serious danger the life of her other child and the van driver she collided with.

“This case draws attention to the importance of ensuring that the correct child safety restraints are used whilst travelling on the roads.”