Home / Life and Style / Woman, 70, becomes ‘one of world’s oldest mums’ as she welcomes first baby 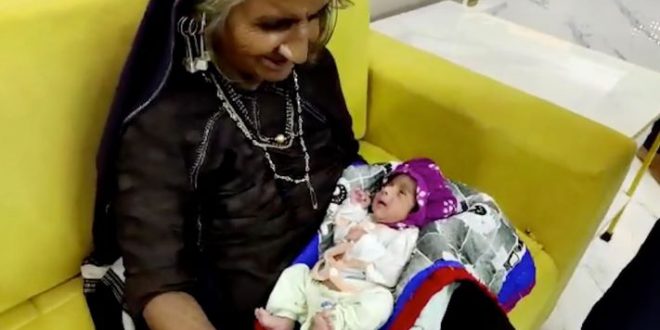 Woman, 70, becomes ‘one of world’s oldest mums’ as she welcomes first baby

A woman who claims she’s 70 years old has just welcomed her first baby into the world, making her one of the oldest first-time mums on the planet.

Jivunben Rabari and her husband Maldhari, 75, have been trying for a baby for several years – but finally welcomed their baby son through IVF this month.

The couple, from a village called Mora in Gujarat, India, have been married for 45 years. Jivunben said she doesn’t have ID to prove her age, but she’s insisted to local reporters she’s 70 years old.

Dr Naresh Bhanushali, who helped the couple with their IVF, said: “When they first came to us, we told them that they couldn’t have a child at such an old age, but they insisted.

Jivunben and her husband Maldhari claim to have been married for 45 years ( Image: Jam Press/Rare Shot News)

The pair had been trying for a baby for a long time ( Image: Jam Press Vid/Rare Shot News)

“They said that many of their family members did it as well.

“This is one of the rarest cases I have ever seen.”

Another Indian woman named Mangayamma Yaramati is believed to be the oldest woman in the world to give birth after welcoming twins through IVF in September 2019, aged 74.

The oldest first-time mum in the UK is Elizabeth Adeney, who welcomed her son into the world in May 2009.

Elizabeth, a wealthy businesswoman, had to travel to Ukraine for IVF treatment as clinics in the UK don’t treat women over the age of 50.

She named her son Jolyon – which means “young at heart.”

Within just four weeks of giving birth, Elizabeth was back at work – going against the grain of medical advice in the UK which typically recommends new mums taking at least three months off.