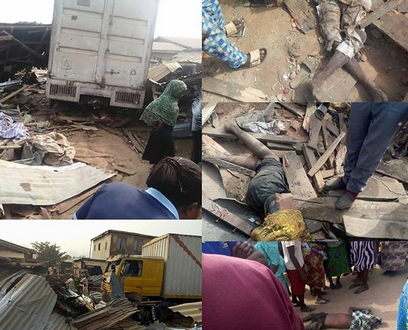 Woman, 2 Grandchildren, Others Crushed To Death

A truck driven by a careless driver, crushed five persons to death on Sunday at Ibaka market in Akungba Akoko, Ondo state.
It was gathered that a woman and two of her grandchildren were among those who lost their lives in the accident, after the driver, who was traveling from the Ikare axis of the road, lost control of the truck.

According to reports, the casualties would have been more had the students of the Adekunle Ajasin Varsity been in session. Five other persons who were injured in the accident, were rushed to the Specialists Hospital in Ikare Akoko.