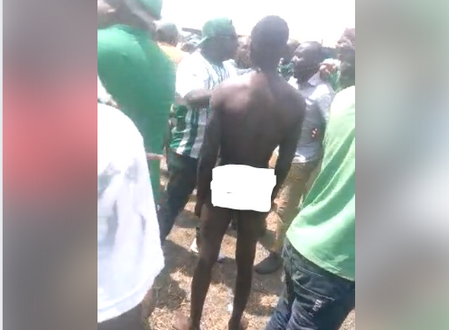 There was pandemonium after a footballer was caught walking around naked in opponent’s dressing room. The incident attracted a huge crowd of football supporters who gathered at the scene and almost attacked the player.

The footballer for Chambeshi football club in Zambia was on Sunday afternoon (yesterday) caught naked in the Mighty Mufulira football team’s dressing room just when the two teams were about to a match.

According to the club supporters, the act is related to football witchcraft which has been going on in African football for years.

The chaotic moment after the naked footballer was caught, was filmed and posted online in a video which has gone viral.