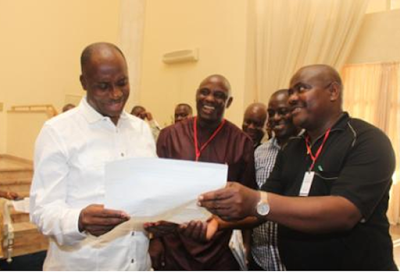 Come Saturday May 27th, Rivers state governor, Nyesom Wike, will honor his predecessor, Rotimi Amaechi, with one of the state’s highest awards.

The awards ceremony is part of activities lined up to mark the state’s golden jubilee. Governor Wike at the ceremony will honor Amaechi with the Grand Service Star of Rivers State.

At the ceremony, Wike will also be honoring past leaders of the state for their contributions towards the growth and development of the state. Former president Goodluck Jonathan and former military leader, Yakubu Gowon, would be be part of the honorees.

Both Wike and Amaechi have overtime become arch enemies after Wike who used to be Amaechi’s chief of staff during his first term in office from 2007 to 2011, aligned with former First lady of Nigeria, Patience Jonathan, and contested for governorship of the state in the 2015 general election, a decision that did not go well with Amaechi.

It is not yet certain whether Amaechi would receive the award himself or would send a representative.