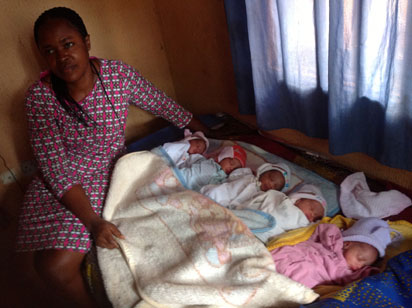 A nurse attending to the quintuplets Read more at: https://www.vanguardngr.com/2018/07/woman-gives-birth-to-quintuplets-husband-a-tricycle-operator-begs-for-aid/

A 29-year-old woman , Mrs Ndidi Odo, has given birth to quintuplets in Nnewi, Anambra State.

She was delivered at God’s Mercy Hospital, Obiuno, Otolo-Nnewi. Hundreds of people gathered to behold the couple, Mr and Mrs Abuchi Odo, and their quintuplets.

The mother of the five new-born babies (four boys and a girl) said she didn’t know that she was carrying quintuplets in her womb and that scan only revealed that she would give birth to twins.

According to her, she earlier had three girls which she got one after the other in different pregnancies, saying the girls were followed by triplets (two boys and a girl).

She, however, explained that she later lost the boys and was left with four girls, noting that she prepared for her last pregnancy which she hoped would produce a boy only to be blessed with four boys and a girl.

Mrs Odo, an apprentice tailor, who was delivered of the quintuplets through caesarean section, said she was  in good health but needed  assistance of well-meaning individuals  as the family could not  cater for nine children.

A nurse in God’s Mercy Hospital, Blessing Odemena, who had a tough time warding off the mammoth crowd that trooped to her hospital, narrated how the lady came to her to complain that she was desirous of having a baby boy as is customary in Igboland.

Odoemena corroborated the new mother’s claim that the scanning done during  antenatal revealed  a set of twins but  that when her patient’s  stomach became too big, the doctor prescribed another scan which indicated triplets.

The father of the new babies, Mr Abuchi Odo, a tricycle operator, who said he wanted to run away after realizing the magnitude of the responsibility that just fell on him, said he was prevailed upon to stay back by one Prince Justin Brown and his elder brother.

He said his old  tricycle could not put food on the table for nine children outside him and his wife. He appealed to Governor Willie Obiano, Mr. Peter Obi, Cletus Ibeto, Dr Ifeanyi Uba, Sir Louis Onwugbuenu, Dame Virgy Etiaba, Archbishop Godwin Okpala and Bishop Hilary Okeke and other eminent personalities in the state and  beyond for help.

Prince Justin Brown, a family friend of the Odos, also pleaded with public-spirited individuals to help the struggling family to keep the babies.

Charles Igbinidu is a Public Relations practitioner in Lagos, Nigeria
@https://twitter.com/ionigeria
Previous (Pictures) Tears As R.C.C.G Pastor, Wife And Five Children Are Buried In Enugu
Next Defection: I Am Not Bothered – Buhari