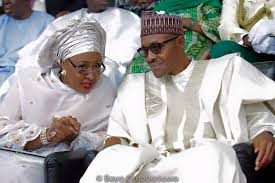 My wife belongs to my kitchen –Buhari

President Muhammadu Buhari has responded to the statement made by his wife, Aisha in a BBC interview during which she said, she may not support him if he runs again.

President Buhari, who is on an official visit to Germany reacted during a joint press briefing with German Chancellor Angela Merkel.

According to The Associated Press, asked to comment on his wife’s views, Buhari said; “I don’t know which party my wife belongs to, but she belongs to my kitchen and my living room and the other room.”

His comments prompted German Chancellor Angela Merkel, standing at his side, to give him a short glare and then laughed.

In an interview with the BBC Hausa-language service broadcast Friday, Aisha Buhari said her husband did not know many top government appointees, and she accused them of not sharing the vision of his All Progressives Congress party. She did not name names.

Buhari also said he hopes his wife will remember that he ran for president three times before succeeding on the fourth effort. “So I claim superior knowledge over her and the rest of the opposition, because in the end I have succeeded. It’s not easy to satisfy the whole Nigerian opposition parties or to participate in the government.”

Charles Igbinidu is a Public Relations practitioner in Lagos, Nigeria
@https://twitter.com/ionigeria
Previous NJC condemns DSS, describes arrest of Judges as “a denigration of the entire Judiciary”
Next Buhari insist that his wife belongs to the kitchen