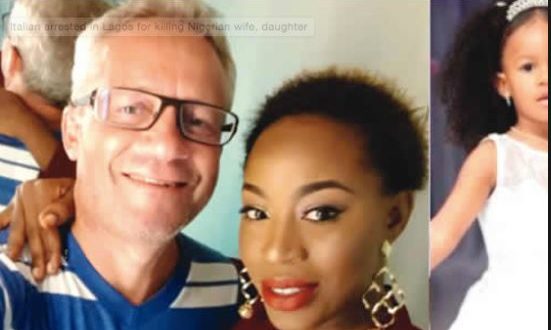 An Italian, identified as Peter Nielson, has been arrested for reportedly killing his Nigerian wife, Zainab Ali-Nielsen, popularly known as Alizee, and her four-year-old daughter, Petra.

Alizee, an artiste, and her daughter, were allegedly murdered in the family’s residence at Ocean Parade, Banana Island in the early hours of Thursday.

Punch reports that Peter had been picked up by the police.

The corpses were said to have been deposited in a mortuary for autopsy.

According to the report, the woman, who hailed from Kogi State had signed a two-year record deal with an Asian record label, Petra Entertainment in 2017, which reportedly earned her a brand new Ford explorer, a house on Banana Island and international distribution with affiliates of her record company in Asia.

He said, “The state Commissioner of Police, Edgal Imohimi, has ordered the arrest of the suspect and he is in police custody.

“It is pre-emptive now to ascertain the cause of the incident.

“The CP has dispatched crime scene investigators to the place to pick evidences for analysis which can be used for prosecution.

“The command has also written the Embassy of the suspect that the police are investigating the case.”