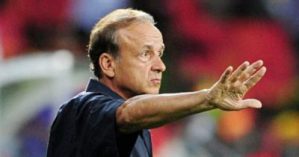 Spread the love
Gernot Rohr, Super Eagles’ technical adviser, has revealed he will not marry a Nigerian woman. Although the tactician stated his admiration for Nigerian ladies in an interview with The Sun on Saturday, he said language and culture are barriers to such intentions.
“My president (Amaju Pinnick) joked about it recently. He said he was going to hand me a Nigerian woman and we all laughed about it. To be sincere, Nigerian ladies are very beautiful and tempting but it is going to be very difficult to marry one. Language and cultural background will be a serious barrier”, Rohr said.
On preparation of the Super Eagles for the 2018 World Cup, which is 47 days to kick off, the coach said the team is not yet ready for the tournament.
Rohr added, “We still have a lot of work to do. The World Cup is not a tea party. We must be ready mentally and physically for it. So, we’ll continue to work hard to put the team in top shape”.
Rohr, like other instances, played down the chances of the team at the tournament. He said the target is to qualify from Group D, which has Argentina, Iceland and Croatia as Nigeria’s opponents.
“Our main target is to qualify from the group. The World Cup is a battle ground and no coach the world over will tell you he’s going to win it before a ball is kicked. Every coach’s target is to take the game one after the other”, he stated.
Also, the tactician said he had been in touch with Mainz over Leon Balogun’s injury and with other injured players. He said he spoke with William Troost-Ekong, who had not been playing for his Turkish club due to the preference of the new coach for home players.
The Franco-German coach further said the technical crew had been tracking Nigeria’s World Cup opponents and reviewing their videos.
“We have the video tapes and have deployed scouts to watch their friendly games. My 30-year old son, who possesses a diploma in coaching, is also assisting us in tracking the teams and they will supply me with the information needed ahead of the World Cup.
“I will also be at some match venues to see what the teams look like before the World Cup. Some of our opponents are seriously planning and they will play African teams to get ready for us,” he said.
Share