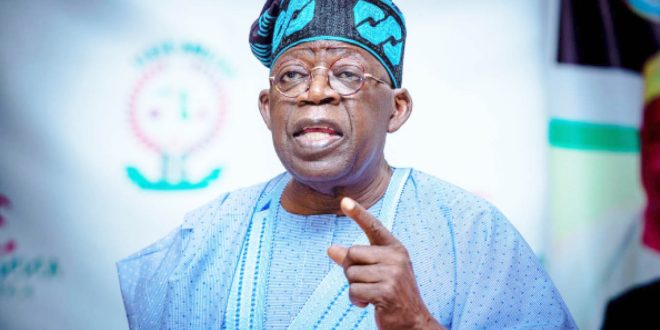 The All Progressives Congress, APC, stakeholders in Enugu State on Wednesday boycotted the Presidential campaign rally of Ahmed Bola Tinubu in Enugu State.

The APC Presidential candidate, Tinubu was in Enugu where he addressed a rally at the Michael Okpara Square.

Also absent were the Director-General of Voice of Nigeria, Mr. Osita Okechukwu, the immediate past chairman of the Party in the State, Barr. Ben Nwoye and a presidential aide, Barr. Mrs. Juliet Ibekaku.

The stakeholders were at the Akanuibiam International Airport Enugu earlier in the day to welcome the presidential candidate of the party Tinubu and disappeared from there to Chime’s residence in Enugu.

Briefing journalists, Chime disclosed that the stakeholders were at the airport to receive the Presidential candidate but because of the internal issue they had with the state chairman Chief Ugochukwu Agballah they would not appear at the venue properly for rally.

He said that their absence at the rally was to send a clear signal to the national leadership of the APC that something urgently must be done over the crisis in the Enugu State chapter of the party.

While calling on the national leadership to address the Enugu crisis, recalled that the issue made them to lead a peaceful protest to the National Secretariat in Abuja, adding that nothing had been done about it till now

While calling on the national leadership to address the Enugu crisis, recalled that the issue made them to lead a peaceful protest to the National Secretariat in Abuja, adding that nothing had been done about it till now.

Hear him, “we received our guber candidate at the Airport. We believe in him, he is the best.

“However, we are not there at Okpara square because of internal crisis within the party in Enugu state. The party had been in disarray, since the imposition of someone who is not a member of the party as the chairman.

“The party leaders went to Abuja, complained but nobody took them seriously, the issues continued. So, we have to distance ourselves from the local chapter of the party.

“We will ensure that he gets more than the required 25 percent. Enugu must be counted” he assured.

He also complained that the governorship candidate of the party and the deputy were from the same senatorial zone nothing that it had never happened since the history of democracy in the state.

The former governor said they would all work hard to ensure APC’s victory during the general election but they were left with no option than to distance themselves from such illegal act.

Also, former Senate President, Ken Nnamani, while expressing anger, regretted that the party had been hijacked by an external body from Imo state.

He lamented that the imposed party chairman in the state and the governorship candidate were running the party like sole administrators.

Nnamani said that they neglected their leaders in all the party’s activities, noting that the calibar of people they had in APC before Agballa’s intrusion were people that could have taken the party to greater heights.

Also contributing, former Speaker of the Enugu State House of Assembly, Chief Eugene Odo, said that the chairman’s attitude was the reason why stakeholders boycotted the rally.

Odo said that Gov. Hope Uzodinma as the leader of the party in South East should ensure the unity of the party instead of using mediocres to run the party and cause crisis in Enugu state party.

Meanwhile, at the rally attended by a large crowd, Tinubu begged for South East support, assured that he would make Igboland an industrial hub if elected.

He said that Nigeria is a blessed country and that her citizens have no business running to foreign countries for greener pastures.

Tinubu, said that there was no country like Nigeria in the entire Africa and as such, he should be supported to renew and rebuid Nigeria.

He said that people who go overseas face hardship and suffering, urging Nigerians to help to make Nigeria great.

“Those who are running to overseas are suffer, suffer.  We have been there.  Anybody who tells you that you cannot do something, pray you can do it,” he said.

According to the APC presidential flagbear, Lagos as a state was better than most countries in the Western world, adding that if Ndigbo should collaborate with his expected government, he would make the zone an industrial hub where things are produced.