Where we’re going! Japanese Company carries out test flight of a flying car – with hopes of launch by 2023

A Japanese company has carried out a successful test flight of a ‘flying car’ after their vehicle lifted test driver into the air.

SkyDrive is among the many companies working to develop a ‘flying car’ but their project took a step in the right direction after they successfully lifted their vehicle several feet off of the ground.

In a video, SkyDrive’s car hovered in mid-air with a passenger inside for four minutes.

Tomohiro Fukuzawa is the head of SkyDrive and he hopes to have a complete product by 2023.

He said: ‘Of the world’s more than 100 flying car projects, only a handful has succeeded with a person on board.

‘I hope many people will want to ride it and feel safe.’

Mr Fukuzawa said that if his team can increase the time their vehicle can spend in the air from five-to-10 minutes to even 30 minutes then the project will offer potentials such as exporting goods to China.

The ‘flying car’ uses Evtol (electric vertical takeoff and landing) to move between positions and it is believed this would help eliminate the hassle of airports and traffic jams in the future.

On top of increasing air time, other challenges facing the project include battery size, air traffic control and infrastructure issues. 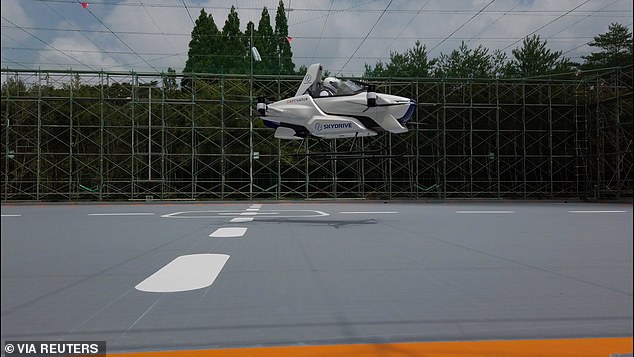 The SkyDrive project attempted another flight three years ago, which ended poorly but recent funding from the Development Bank of Japan has helped their work progress.

Sanjiv Singh is a professor at the Robotics Institute at Carnegie Mellon University who co-founded Near Earth Autonomy in Pittsburgh and his team are also working on an Evtol vehicle.

Lilium of Germany, Joby Aviation in California and Wisk, a joint venture between Boeing and Kitty Hawk, are also working on Evtol projects.

He said: ‘But the time between technology and social adoption might be more compressed for evtol vehicles.’

SkyDrive began in 2012 as a volunteer-based project called Cartivator which received funding from companies such as Toyota, Panasonic and video game developer Bandai Namco.

The Japanese government is bullish on ‘the Jetsons’ vision, with a ‘road map’ for business services by 2023, and expanded commercial use by the 2030s, stressing its potential for connecting remote areas and providing lifelines in disasters.

Experts are comparing the buzz over flying cars to the days when the aviation industry got started with the Wright Brothers and the car industry with the Ford Model T.

Charles Igbinidu is a Public Relations practitioner in Lagos, Nigeria
@https://twitter.com/ionigeria
Previous Zoom Blunder! Government Official is caught having SEX with his secretary after accidentally joining Zoom meeting with his colleagues
Next Contract for construction of Abuja-Kaduna -Kano road inflated by over N60b – Reps