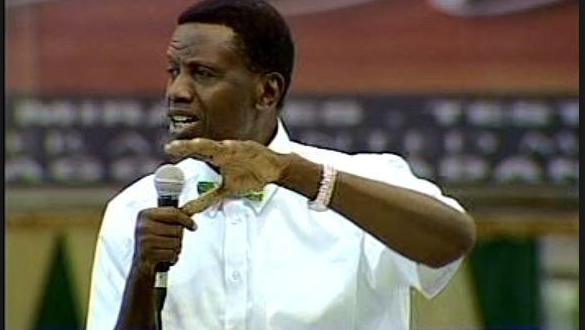 “What God Told Me About June 12 Election”— Pastor Adeboye

The Celestial had settled that late billionaire businessman, Moshood Kashimawo Abiola would not be Nigerian president even if he won an election to the office, before he “won” the June 12, 1993 presidential election.

General Overseer of the Redeemed Christian Church of God, Pastor Enoch Adejare Adeboye, revealed this Friday midnight during the April edition of the monthly Holy Ghost Service at the Redemption Camp, along Lagos/Ibadan Expressway.

In his sermon entitled “Stronger Than Your Enemies Part 4”, he admonished thousands of worshipers to take prophecies seriously especially when such are coming from genuine men of God.

While refusing to reference self as a prophet, he however acknowledged that he gets to hear from God once in a while, adding that whatever came from the Almighty would definitely come to pass, whether those involved believed or not.

He then relived the prophesy he got from God before the June 12, 1993 presidential election which had Abiola and Bashir Tofa as front-line candidates, as well as late Aminu Kano who was also interested in leading the country.

According to him, “election was going to take many years back and while I was minding my business just praying and praising God, God suddenly told me that ‘son, the winner will be the loser, the loser will be the winner and Aminu Kano is the most fortunate of them all’.

“How do you explain a prophesy like this but because it was God that has spoken, it is already settled. Then, Aminu Kano died before the election could take place and you start asking the meaning of him being the most fortunate. With his death, only Abiola and Tofa contested the election.

“At that time, I was the president of PFN, (Pentecostal Fellowships of Nigeria) and pastors came to TBS (Tafawa Balewa Square) saying, the two candidates in the election are Muslims and we are Christians, so who are we to vote for.

Abiola, presidential candidate of the defunct Social Democratic Party (SDP), the presumed winner of the watershed election eventually died in prison custody on July 7, 1998, while being held for alleged treason by the military junta of late Sani Abacha and former Head of State, Abdulsalam Abubakar.

He was eventually posthumously declared the winner of the said election.

Speaking on the theme; Children of Conquerors, Adeboye also pointed out that regardless of the official stance of a negotiation between the Muhammadu Buhari-led administration and terrorist Boko Haram leading to the release of the abducted female students from Dapchi government college, their release was a miracle of God and an answer to the prayer collectively offered at the March Holy Ghost service.

He prayed for the safe return of those still in the terrorists’ captivity.

Adeboye also urged the congregation that instead of praying for all enemies of the children of God to die, it would be great to have some of them, bowing to the God of the ones they want to destroy.

“How great will it be, if we have the leader of the Boko Haram, standing here (the altar), giving his life to Christ” he said.

Testimonies shared at the programme, which also witnessed an anointing segment, include; the raising of the wife of a pastor who died in her sleep, a couple giving birth to twins after about two decades of marriage, a muslim encountering Adeboye at Abuja airport and coming in contact with the Holy Spirit leading to his salvation, amongst many others.

Previous “I Made Over A Hundred Million Naira From Kidnapping”- Says Herdsman
Next Indecency: Couple Charged For Having 35 Minute Sex Romp Under A Bridge In Broad Daylight