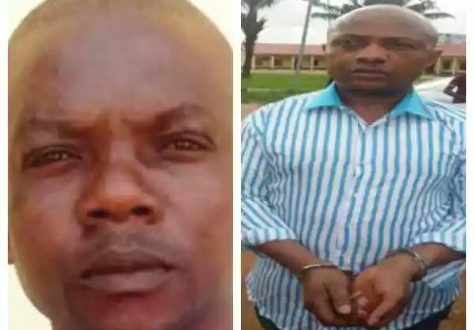 I Went Into Kidnapping To Make Money Like Evans – Suspect .

The police in Ogun State have foiled the attempt of a 44-year-old bricklayer, Mukaila Alatunse, to kidnap his neighbour, Precious Ogundiran, a student living with her parents at Lemode, Ijoko, and the only child of the family.
Alatunse was said to have discussed his plan to abduct Ogundiran with a vigilante in the neighbourhood, telling him that they could get as much as N5m ransom from her parents. .

It was gathered that the vigilante played along with the father of seven, and later divulged the plan to Ogundiran’s father, a lecturer at the National Open University of Nigeria on Victoria Island, Lagos State. .

The father was said to have reported the case to the police at the Agbado division, leading to the arrest of the suspect on Monday. .

In a chat with Punchng, the native of Ikire, Osun State, said he took to the crime after hearing the news of how the notorious kidnapper, Evans, made millions of dollars from kidnapping. .

He said he got Ogundiran’s phone number and some other details from a shop owner in the area, adding that the trader was not aware of his plan. He said, “I am also a commercial motorcycle rider and the vigilante rode on my motorcycle on June 16 in the evening. .

We were discussing how kidnapping had become a way of making quick money. I explained to him how Evans made a lot of money from kidnapping and suggested we should also try our luck.

I told him that I knew a lecturer, who had one child, and that we would make millions of naira from the man if we kidnapped his daughter. He said he was also interested and we exchanged contacts.”

Alatunse said things had been difficult for him and his family in the last three months and that he wanted to use the ransom to assuage his suffering. “I have seven children with two wives. .

One of my wives died recently and I don’t have money to take care of the children. This is the first time I would attempt kidnapping. I am appealing for mercy,” he added.

Previous Senate Gives Agencies One Week To Submit 2017 Budget
Next Couple Who Married, 21, Years Ago, As Man And Wife, Renew Their Vows As Same-Sex Couple .