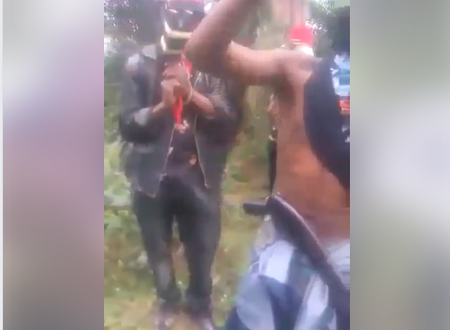 ‘We Will Continue To Kill’ – Cultists Issue Stern Warning To Government

Yesterday, members of dreaded cult group known as Islands trooped out from their hideout in a bush to surrender their weapons to the authorities while denouncing their membership of the cult groups in Ukanafun and Etim Ekpo local government areas of Akwa Ibom state.

This happened after governor Udom Emmanuel, signed into force, the Cultism and other Violent Behaviour Prohibition Order 2018 with effect from March 12, 2018.

In a shocking trending video posted online by some cultists/militants, the masked men who were armed with various guns – called on the state governor to settle them as it’s being done in order states.

The cultists said that they have been crying and suffering that’s why they decided to carry arms.

They urged president Muhammdu Buhari, governor Udom and lawmakers to settle them (give them money) or else they would continue killing people including parents and children because they have no joy.

They said they need freedom because they don’t like killing people and if the government does not give them peace, there would be no peace in the state.