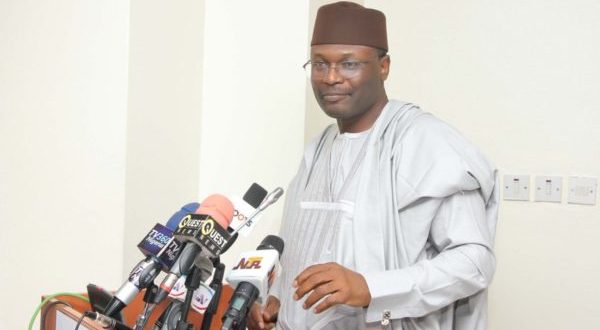 We did not transmit result through server’, Atiku’s result fake, INEC tells Tribunal

The Independent National Electoral Commission (INEC) has declared that it never transmitted results of the presidential election through any server and any figures purportedly obtained thereof are fake.

It disowns the website, factsdontlie.com, which Atiku alleged before the Presidential Election Petition Tribunal as the source of the election results he claimed to have won.

Responding to Atiku’s petition point by point, the commission said that contrary to the claim by the PDP and Abubakar, it owns no server and never transmitted any results through electronic server.

“The Smart Card Reader till date was used for authenticating registered voters not for sorting, counting, transmission or collation as these processes are still manually done, given the state of the law.

“The 1st respondent (INEC) has no server that contains the purported results the petitioners are claiming they got from a purported server.

“In spite of the scheme at the time, counting, sorting, transmission and collation of votes during the 2019 general elections and the presidential election in particular were all done manually and not electronically.

“The purported figure of 37,668,305 being bandied  by the petitioners as  the actual number of accredited voters is unknown to the 1st respondent and never existed in its record.”

It specifically denied the existence of electronic transmission of results as it is unknown to the Electoral Act, 2010 (as amended) and Regulations and Guidelines for the conduct of the elections 2019.

INEC faulted the petitioners’ claim that the results of the election were transmitted electronically.

In a witness statement attached to the INEC claims, the commission’s Director,  Information and Communications Technology, Chidi Nwafor denied all the petitioners’  claim about a server and branded it as false  “as I know as a fact that the 2nd respondent (President Muhammadu Buhari) was duly elected by majority of the lawful votes cast at the presidential election and scored at least one-quarter of the lawful votes cast at the election in 33 states and the Federal Capital Territory, Abuja, more than two-third of all the states of the federation and the Federal Capital Territory.”

The lawful and recognised computation of results is manually done using Electoral Form EC8 series and not the table pleaded by the petitioners given that the said table is not the result collated and declared by the 1st respondent.

“I know as a fact that the details contained in the table in the paragraph 22 of the petition are inaccurate.

“I know that the Manual Technologies 2019 and demonstration videos referred to in paragraph 27 are internal training materials.”

But INEC said it had no query over  Buhari’s academic documents.

The Commission said it was “satisfied with the educational qualification presented” by the president to run for the election.

INEC’s   lawyer, Yunus Ustaz (SAN) brands Atiku’s  petition as frivolous, incompetent and/or lacking in merit. He prays the tribunal to dismiss the petition.

It plans to call 83 witnesses in its defence.

Charles Igbinidu is a Public Relations practitioner in Lagos, Nigeria
@https://twitter.com/ionigeria
Previous Atiku accuses APC of trying to redefine ‘Nigerian’, over claim that he is a Cameroonian
Next World leaders, Sports personalities applaud Tiger Woods for winning fifth Masters