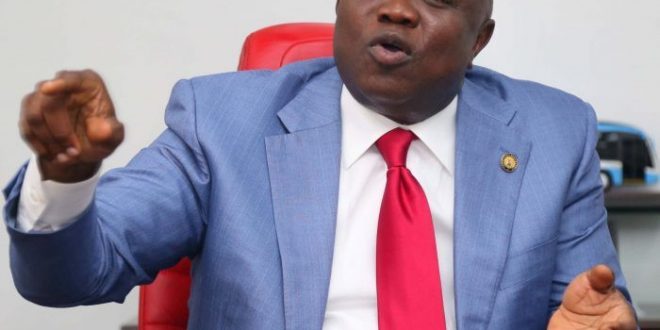 We did not raid Ambode’s residence-EFCC

The Economic and Financial Crimes Commission, EFCC has denied raiding the residence of the immediate past Governor of Lagos State, Akinwunmi Ambode. A statement from the Antigraft agency reads

The Economic and Financial Crimes Commission, EFCC has since early hours of today, been inundated with calls that operatives of the Commission raided the residence of the former governor of Lagos State, Akinwunmi Ambode.

We need to state for the records that the EFCC did not raid Ambode’s house. It is instructive that his administration, like other former governors is under investigation, since they no longer constitutionally enjoy immunity against prosecution.

The Commission hereby states with high sense of responsibility that the operatives did not raid Ambode’s residence. Whatever the Commission is presently doing with regards to the investigation is in line with its mandate and the rule of law.

We wish to inform the social media to be circumspect in the reportage of any news with regards to investigation activities of the Commission.
As a tradition, the Commission does not carry out investigation on the pages of the newspapers or through the media. Our operations are always covert until at a time when we file charges in court.

Therefore, the attempt to cast the Commission in a bad light is unacceptable as the EFCC will never engage in illegal act. We remain committed to the war against corruption.”

Charles Igbinidu is a Public Relations practitioner in Lagos, Nigeria
@https://twitter.com/ionigeria
Previous ‘Be ready to work with this government to lift 100 million Nigerians out of poverty’ – President Buhari tells ministers-designate
Next Governor Abdulrazaq locks out Kwara workers over lateness