Home / Uncategorized / WATCH: Iranian Governor SLAPPED because man Is Furious his wife’s Covid-19 vaccine was administered by a man 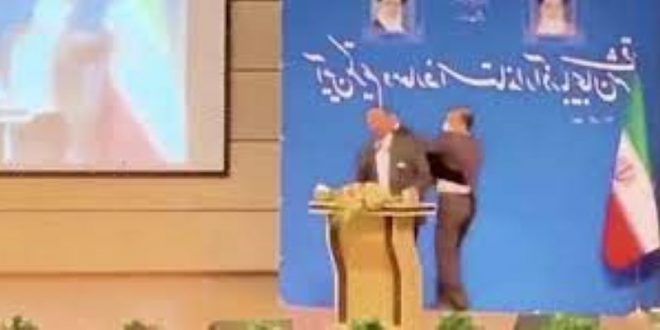 WATCH: Iranian Governor SLAPPED because man Is Furious his wife’s Covid-19 vaccine was administered by a man

The inauguration of an Iranian governor was interrupted by a man walking on stage and slapping him in the face – allegedly because he was furious his wife had to get her Covid jab delivered by a male doctor.

Abedin Khorram was appointed as Governor of East Azerbaijan Province in northwestern Iran was slapped by ‘a member of the armed forces’ during the ceremony, according to the regime-linked Fars news agency.

Mr Khorram is a former IRGC provincial commander and has reportedly been kidnapped in the past by Syrian rebel forces.

After taking the podium for his inaugural address, the man strode onstage and powerfully slapped Khorram in the face.

The connection that the man made echoed through the room after it was picked up by the podium’s microphone.

The motive for the attack is unclear with one report saying the man was unhappy that his wife’s Covid-19 vaccine had been administered by a male healthcare professional.

Security immediately swarmed the stage and dragged the assailant off through a side door, knocking down a curtain as they did.

Khorram later returned to the stage and made several quips about his reported time in Syria.

Khorram said: ‘I do not know him of course but you should know that, although I did not want to say it, when I was in Syria I would get whipped by the enemy 10 times a day and would be beaten up.

‘They would hold a loaded gun to my head. I consider him on a par with those enemies but forgive him.’

Though he denied knowing the man, the state-run IRNA news agency described the attacker as a member of the Guard’s Ashoura Corps, which Khorram had overseen. 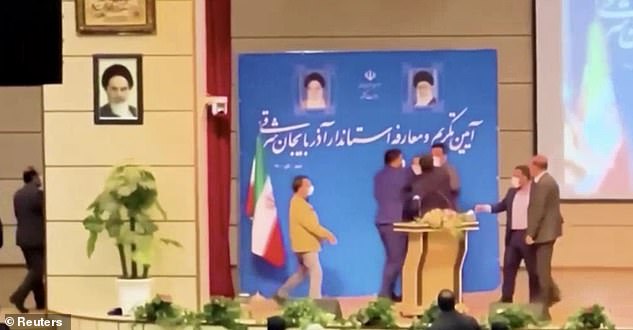 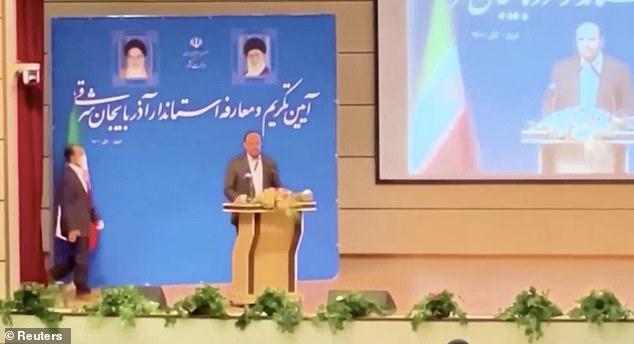 IRNA described the attack as coming due to ‘personal reasons,’ without elaborating.

Another man on stage shouted’ death to the hypocrites’, a common chant used against exiled opposition groups and others who oppose the ruling regime.

Others cried out that Khorram was a ‘pro-supreme leader governor’ after being recently nominated by Iran’s hard-line parliament to serve as the provincial governor.

Khorram had been among 48 Iranians held hostage in 2013 in Syria, later released for some 2,130 rebels, according to the Foundation for Defense of Democracies, a Washington-based think tank that long has been critical of Iran. 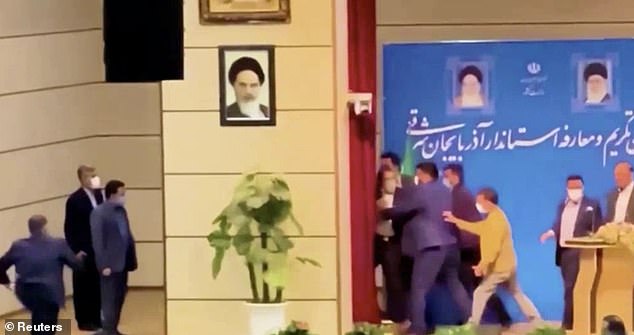 Iran had referred to those held as Shiite religious pilgrims.

A State Department spokesperson at the time called it ‘just another example of how Iran continues to provide guidance, expertise, personnel (and) technical capabilities to the Syrian regime.’

The incident also comes amid anger in Iran over its precarious economic situation despite its support abroad for regional militias and others, including Syrian President Bashar Assad.

Iran’s economy has been hammered since then-President Donald Trump unilaterally withdrew from Tehran’s nuclear deal with world powers in 2018.