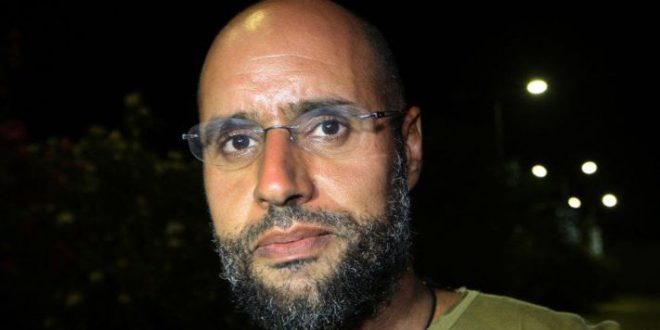 Prosecutors in Libya have issued an arrest warrant for Saif al-Islam Gaddafi, the son of the late Libyan leader Muammar Gaddafi, over suspected ties to Russian mercenaries.

A BBC World Service investigation has revealed links between the shadowy Wagner group’s activities in Libya and war crimes committed against Libyan citizens.

Russian fighters first appeared in Libya in 2019 when they joined the forces of a rebel general, Khalifa Haftar, in attacking the UN-backed government in the capital Tripoli. The conflict ended in a ceasefire in October 2020.

The Wagner group was first identified in 2014 when it was backing pro-Russian separatists in the conflict in eastern Ukraine. Since then, it has been involved in regions including Syria, Mozambique, Sudan, and the Central African Republic.

The order for Saif al-Islam Gaddafi’s arrest was circulated internally to Libyan security bodies by prosecutor Mohammed Gharouda on 5 August, but was only made public after the BBC’s investigation was broadcast.

Who is Saif al-Islam Gaddafi?

Gaddafi has long been suspected of having connections to Russia.

Before the 2011 uprising, he was believed by some to represent the hope for gradual reform in Libya, which had been ruled by his father Muammar since 1969.

A fluent English speaker who studied at the prestigious London School of Economics, he was long seen as one of the most influential people in the country and a likely successor to his father.

However, once anti-government protests broke out in Libya in early 2011, Gaddafi joined the state’s bloody crackdown on protesters.

The rest of his family were eventually killed or fled the country. Gaddafi, meanwhile, was captured by rebels in late 2011 and taken to the city of Zintan, to the south-west of Tripoli. He was freed by the militia holding him six years later.

During his detention, he was sentenced to death in absentia by a court in Tripoli over the killing of protesters in 2011.

He is also wanted by the International Criminal Court (ICC) for crimes against humanity committed during the crackdown.

Although he has not been seen in public in years, Gaddafi gave an interview to the New York Times in July, in which he spoke of his plans to return to politics.

According to sources in Tripoli, he is likely to still be hiding in Zintan.

During the making of the BBC documentary into the Wagner group’s operations in Libya, the BBC met Libyan intelligence officials who spoke of Gaddafi’s strong links with Moscow and described him as “Russia’s favourite candidate to rule Libya”.

The intelligence officers had been investigating Maxim Shugaley, a Russian citizen who was arrested in Tripoli in May 2019 on charges of espionage.

He was accused of working for Yevgeny Prigozhin, a rich businessman close to President Vladimir Putin, as part of an election meddling campaign designed to establish Gaddafi as the ruler of Libya during Gen Haftar’s offensive against the capital.

Mr Shugaley, and his Arabic translator who was arrested alongside him, were released in late 2020.

According to reports, Mr Shugaley had personally met Gaddafi during his time in Libya. Russia has even produced two films on Mr Shugaley’s arrest, which have been published on YouTube and portray Gaddafi as “the saviour of Libya” and Mr Shugaley as a “Russian hero”.

One Libyan intelligence officer told the BBC: “If Russia had its way, we would have had Saif [al-Islam] Gaddafi giving his victory speech in Tripoli’s famous Martyrs’ Square.”

Libya – a decade of turmoil

Downfall of Gaddafi in 2011: Col Muammar Gaddafi’s more than four decades of rule end in an Arab Spring uprising. He tries to flee but is captured and killed

The country splinters: After 2014, major competing factions emerge in the east and west

The advance on Tripoli in April 2019: Gen Haftar, leader of the eastern forces, advances on Tripoli and the UN-backed government there. Both sides get military and diplomatic support from different regional powers, despite a UN arms embargo

Ceasefire in October 2020: Then in early 2021 a new unity government is chosen and sworn in, to take the nation to elections in December. Foreign fighters and mercenaries were supposed to have left, but thousands remain

Charles Igbinidu is a Public Relations practitioner in Lagos, Nigeria
@https://twitter.com/ionigeria
Previous Brazil Congress expels lawmaker accused of ordering the murder of her husband
Next Britney Spears’ father Jamie agrees to step down as her conservator