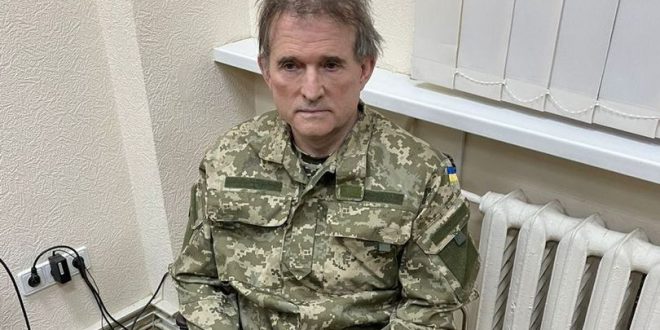 Viktor Medvedchuk, one of Vladimir Putin’s closest allies, captured by Ukrainian forces in a special operation

One of Russian President Vladimir Putin’s closest allies has been captured in a special operation by Ukrainian forces after fleeing his house arrest from his luxury house in the war-torn country.

Disgraced oligarch Viktor Medvedchuk is thought to be one of the closest allies to Putin and claims the president is the godfather to one of his daughters.https://get-latest.convrse.media/?url=https%3A%2F%2Fwww.dailystar.co.uk%2Fnews%2Fworld-news%2Fputin-crony-viktor-medvedchuk-caught-26698942&cre=top&cip=3&view=web

The politician has been on the run since February and was accused of treason by Ukraine last year for his close links to the Russian regime.

Captioning the photo, the president said: “A special operation was carried out thanks to the SBU. Well done! Details later. Glory to Ukraine!”

Before the war, Medvedchuck was the leader of Ukraine’s most prominent Kremlin-loving political party – called Platform-For-Life – and was estimated to be worth around £600million by Forbes last year.Ads by

He had previously tried to mediate between the two warring countries, but when current Ukraine President Volodymyr Zelenskyy came to power in 2019, that role was stopped, and in February last year, a decree was signed accusing Medvedchuck of “financing terrorism”.

He was placed under house arrest after prosecutors accused him of high treason, a move which Russia called “an absolutely obvious purge of the political field” and “anti-Russian”.

It is the latest setback in Putin’s faltering invasion which has seen him reportedly purge 150 of his security officials.

The officers are said to be from the FSB security service, which is the successor to the KGB, with some removed from their posts while others have been arrested, reports The Mirror.

All of those ousted were said to be employees of the Fifth Service, a division that was set up in 1998 when Putin was director of the FSB to perform operations in former Soviet Union countries.