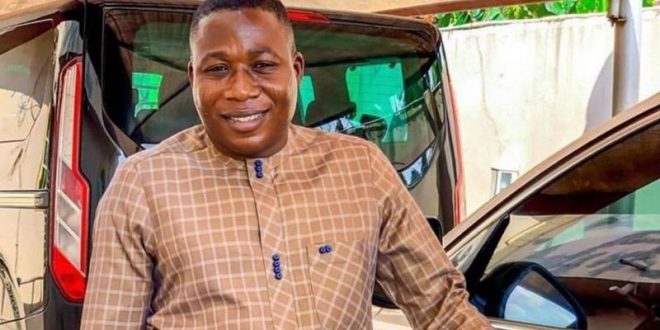 In an undated video obtained and translated by PRNigeria, Igboho while addressing Yoruba leaders and youths, berated the politicians for not identifying with the agitation for Oduduwa Republic.

According to him, the Yoruba politicians are not supposed to be clamouring for the 2023 presidency at this period, but rather to be in the forefront of the secessionist agenda being championed by him and other South Westerners.

When contacted on the video threat of Sunday Igboho, the spokesperson of the Department of State Security Service (DSS), Dr Peter Afunanya told PRNigeria that the intelligence agency would continue to discharge its duties within its statutory mandates.

Sunday Adeyemo, who is popularly known as Sunday Igboho said: “If not that you (Yoruba political officer holders) are all unfortunate representatives, you should be leading us in the secessionist struggle. But you are busy campaigning for the next Presidential election. You must be mad.

“You should know that you are not supposed to seek election to the office of the President, you are supposed to identify with our (Yoruba) agitation and lead us in the secession activities.

“I will not allow you to campaign because I will kill you all (Yoruba politicians) before campaigns start (in 2023), I swear by God.

“I will not allow you to campaign because we will kill you all (Yoruba politicians) before their campaigns for elections. I swear by God. It is either they go elsewhere or we will shoot them with guns from the back “I urge you the Yoruba elders, traditional rulers to lead us to secession war for the independent

Oduduwa Republic. We should not be afraid… We will have more money because we have crude oil and sea (to sustain the economy of Oduduwa Republic). We will enjoy our new country most.

“If you support our secession plans, we will suffer for less than two weeks only and later enjoy the Eldorado. Why are you (politicians) selfish, asking us to campaign for you to become Nigerian President in 2023? Are you mad?

Let your campaign be limited to your family members. If you campaign in the public, I will fight you.”

“I am calling on my followers to go and prepare charms for a decisive struggle/battle for the Oduduwa Republic. We must divide this country… We don’t want to stay (in Nigeria) again.

“Out traditional rulers are cowards and obeying orders from local councillors. Recently I learned that a Yoruba monarch threatened a female secessionist living in Germany not to come back to the country. I am now appealing to the lady to come and I will be glad to receive and defend her at the airport.

“Probably on that day, we may change the name of Murtala International Airport (Lagos) to Awolowo Airport.

Some of our useless elders were behind the renaming of our Airport to Murtala Airport instead of naming it after themselves rather than Fulani name. The Yoruba elders behind the naming of the airport are insane and crazy mad people.

“The real war that will end everything will happen on the day I will receive the female secessionist at the airport. Let’s them dare me,” he concluded.

Charles Igbinidu is a Public Relations practitioner in Lagos, Nigeria
@https://twitter.com/ionigeria
Previous Cuomo calls for independent review after second former aide accuses him of sexual harassment
Next Trump rules out new political party, says he may run again in 2024 in speech to conservatives