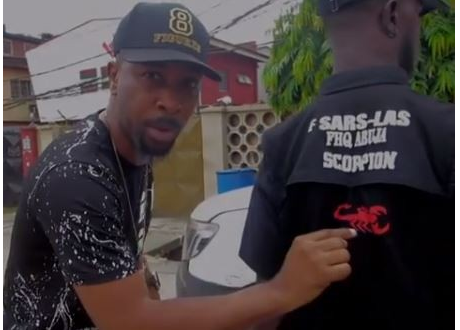 Nigerian rapper, Ruggedman has shared a video highlighting tips on how to identify real SARS officers.

According to him, ‘the new OC SARS Lagos state ,CSP Peter Gana. He said a lot of people have been impersonating and carrying out terrible acts as sars officials and he showed me how to spot fake sars. So I thought to share them with my people’.

In the video he shows that, ‘the real sars have a Red scorpion on their cap and jacket with the number 039 on them. Sars units are only allocated 2 riffles. So any group of alleged sars officials you see with more than 2 riffles are fake’.

I then told him that
1. Without a proper uniform, anybody (including armed robbers) can buy black t-shirts and print sars on them.
2. They need proper mode of identification e.g. name/number badge to make tracing their station easy.
3. Since they are a special unit with so much negativity around them at the moment, it’s best to get them off the streets for now (unless when a special crime is happening) because the brutalisation, extortion, kidnapping and unlawful arrests of innocent Nigerians is too much.
We don’t have a problem with them dealing with confirmed criminals, but treating innocent Nigerians like animals is turning the country into a ticking time bomb.

If you fall victim to the rogue officials, if a video is impossible just try to get a good picture of one of them. Then dm me or call

Just like us, he is also tired of the police impunity. While we wait to see the difference the new OC Sars has promised, the #Endsars campaign is here to stay until our demands are met.

Previous Voodoo!!! Three Siblings Kill Their Elderly Mother, Bath In Her Blood In Sacrifice To Satan
Next Six Traders Perish As Herdsmen Attack Market In Taraba