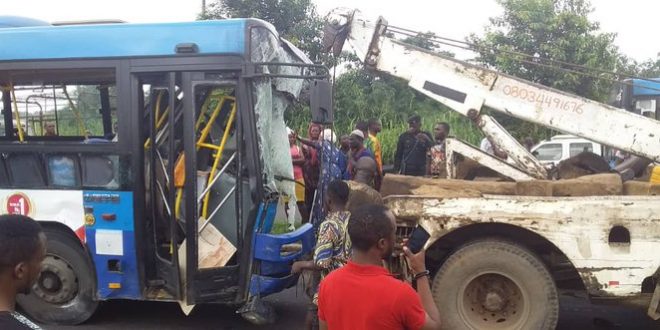 At least one person was confirmed dead and scores injured in a ghastly auto crash Tuesday, morning, when a truck belonging to Dangote company, had a head-on collision with a 60-seater high capacity Bus Rapid Transit BRT, along Ikorodu Road, Lagos State.

The General Manager of the Lagos State Emergency Management Authority, LASEMA, Dr Femi Oke-Osanyintolu, who confirmed the incident, said the injured has been rushed to a nearby hospital for treatment.

According to report, the incident happened at about 11 am, some of the survivors rescued from the crash sustained critical injuries.

The fatal accident led to traffic gridlock as the road was cordoned off on both sides for easy rescue and evacuation operation.

However, men of the Nigeria Police, Lagos State Traffic Management Authority, LASTMA, Federal Road Safety Corps, FRSC, Lagos State Neighbourhood Safety Corps, LSNSC ,among other emergency responders were on ground to restore normalcy as well as prevent any form of breakdown of law and order in the area.