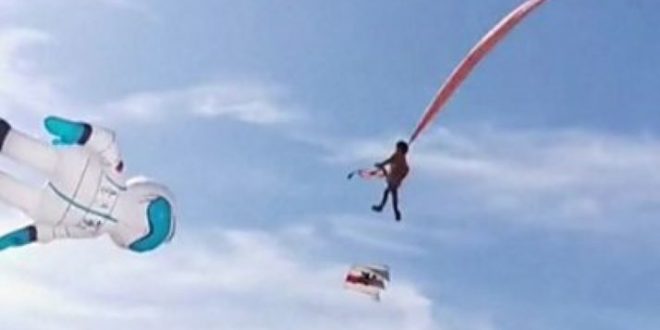 Girl thrown into air by kite in Taiwan

VIDEO: How three-year old girl was thrown more than 100ft into air by kite

This is the heart-stopping moment a little girl was whipped more than 100ft through the air in a terrifying kite mishap.

The event was taking place in the seaside town of Nanlioao when the little girl found herself caught up in the huge, long-tailed kite.

She became entangled in its strings, which sent her soaring above a crowd of gobsmacked onlookers.

Footage from the scene shows a group preparing the kite for lift-off shortly before, as an unsuspecting crowd watches on.

As the kite is launched through the air, the little girl hangs from the end, wrapped tightly in its brightly coloured embraced.

Festival workers battle to bring her back to earth as festival goers stand below.

She landed a short while later with several adults rushing to her rescue.

They appeared to catch her in their arms, before freeing her from the kite’s vice-like grip.

According to local media, the girl was frightened but got away injury-free.

Amazingly, she is said to have only suffered minor cuts.