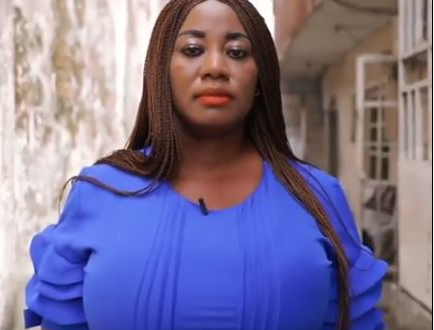 (Video) Help, My Breast Is Killing Me – Woman With Huge Bosom Cries Out

Violent J was sleeping one night when she began to feel pressure around her neck. She opened her eyes to the rude shock that her massive bosom was actually choking her.
Its difficult for people to believe a woman’s breast could suffocate, but some women with big breasts have this challenge.

Since then, “I haven’t been able to sleep on my back” Violent J told the BBC. in an interview originally written in Pidgin English and later translated by a Tori News correspondent.

Violent J who is a mother of two said she is experiencing back and shoulder pain in addition to the weight of the breasts which are weighing her down.

She has decided to ease her struggle with her huge breasts through a surgical operation.

“I need a surgery” she said.

“After giving birth, the breast size didn’t decrease and there was no milk inside. As I am speaking to you right now, my breasts are heavy on my chest. I wish I could loose my bra for you to see but that is not appropriate. Some people have big breasts but they are light. My breasts are heavy”

“My bra size is not even in the market and I have to contract fashion designers to make special bras for me” she added.

She went to complain that the breasts have affected her dressing pattern as she is always conscious of the kind of clothes she puts on to prevent causing a scene in public.

According to her, her bosom frequently causes a stir when she steps out with young men insulting and flirting with her. She is presently looking for money to undertake a surgical operation to reduce the size so that she could sleep well at night and ease the pressure on her body.

Having Big Breasts is not a medical condition

Dr Aranmolate Ayobami who is a cosmetic surgeon said its normal for women to feel pains due to the massive size of their boobs but its not very common in the society.

In the medical field, such a condition that causes pains is called ‘Macromastia’ and the cause is not really known in medicine.

“I have operated on up 5 to 10 women in the last two years because of big breasts or giant breasts as they call the case” Dr Aranmolate Ayobami said.

“Its big breasts when women start to complain of back ache, bra line and injury. The breasts could be regarded as big when they not proportional to the body size of the person or not in correspondence with the person’s age. In some books, any breast that is bigger than 1.5kg is regarded as giant breasts”

“A very huge breast could be as big as a bottle of EVA water. Most times, any woman with a breast size above D cup is regarded as big. The moment you start to reach E, G, H, its clear a big breast”.

“An average women should wear a bra size of C and D in terms of cup size” the medical practioner insisted.

“Women with big breasts have no health issues and there is nothing to fear. Its just a big breast”

“The simple solution is breast reduction. What we (doctors) do is to cut off some parts of the mammary gland to reduce the size. A plastic or breast surgeon could take care of that.”

I will advise busty women not to lose sleep over it. They should just visit the nearest hospital that deals with the health of breast or specifically a plastic surgeon to resolve the problem” he concluded.