Home / Life and Style / VIDEO: Former Policeman who confessed to raping and killing 83 women expresses ‘regret’, wishes he had been executed 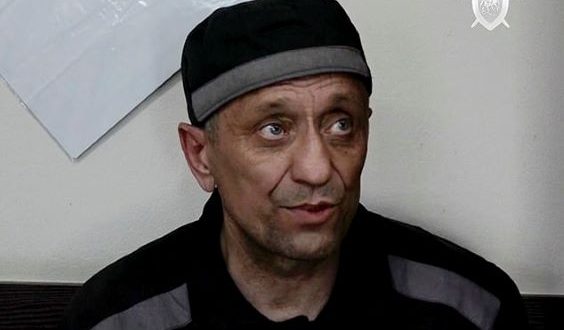 Former policeman Mikhail Popkov, 56, (pictured) is currently serving a life sentence at a penal colony in Mordovia after being convicted of killing 81 women - many of whom he also raped

VIDEO: Former Policeman who confessed to raping and killing 83 women expresses ‘regret’, wishes he had been executed

Russia‘s worst-ever serial killer, who has confessed to killing 83 women and has been branded The Werewolf, has said he wishes he had been executed.

Former policeman Mikhail Popkov, 56, is currently serving a life sentence at a penal colony in Mordovia after being convicted of killing 81 women – many of whom he also raped.

The serial killer, who only recently admitted to another two murders in the 1990s, has now expressed ‘regret’ for the first time over his reign of terror.

But police believe his final toll will be higher still with a senior investigator working on the case predicting more than 100 and possibly ‘closer to 200’.

Speaking about his life in the Russian penal system, the father-of-one said: ‘There were moments when I thought the death penalty was better.’

‘I have a lot to regret. For example, that none of this had happened, that I had not done -these things],’ he told local news site Vesti Irkutsk.

‘It is a natural desire of any person – to regret. I have had a lot of time to think.’

Popkov remains evasive about the number of women he killed.

‘I did not count the number of my victims,’ he said

Popkov routinely used his police car to offer lifts to lone women as they walked home after a night out in his home city Angarsk.

‘I cannot tell you the details of the episodes but everything was the same – in the city, late in the evening, at night, being drunk.

‘I stopped then I felt fear that I would be caught.’

A law enforcement video shows Popkov at a murder scene as he explained how he killed one of the two victims he recently admitted.

He confessed to forcing her to have sex and told a detective: ‘We quarrelled and I murdered her.

‘I hit her on the top of her head… She fell down and did not show any signs of life.’

Lt-Col Evgeny Karchevsky, lead investigator on the mass murder case, previously said: ‘I am more than sure that Popkov committed 100-plus crimes, if not closer to 200,.

‘It was impossible for him to stop halfway.’

There is concern that Popkov is rationing his confessions in order to be regularly moved back to the Siberian crime scenes from his hard labour penal colony called Torbeyevsky Tsentral in Mordovia.

He said: ‘I had been working in Torbeyevsky Tsentral for 10 months and just wanted a vacation, so I wrote a confession.

‘I knew that I would be brought to Irkutsk.’

Popkov is currently being put to work sewing uniforms and making face masks amid the ongoing coronavirus pandemic.

Charles Igbinidu is a Public Relations practitioner in Lagos, Nigeria
@https://twitter.com/ionigeria
Previous Man, 78, ‘killed his 74-year-old wife with a hammer because he thought she was unfaithful’
Next Malami’s directive to IGP on Edo Assembly, a nullity says PDP