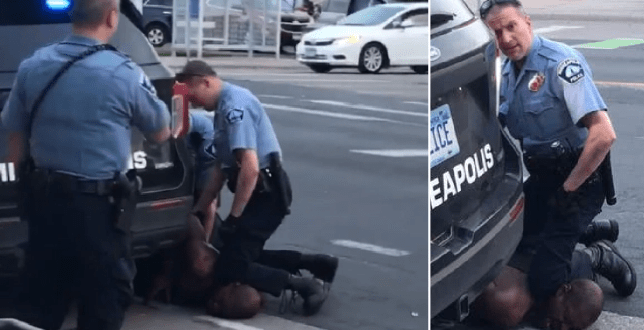 A black man was killed after an officer in Minneapolis, Minnesota knelt on his neck for at least four minutes. (Picture: Facebook)

A black man died shortly after a police officer was filmed kneeling on his neck as he pleaded that he could not breathe.

The man, who has not been identified, died on Monday night in Minneapolis, Minnesota in a hospital following the struggle with the officers.

Police were initially called to investigate a report of a forgery at a business and found the man matching the suspect’s description in his car, police spokesman John Elder said.

‘He was ordered to step from his car. After he got out, he physically resisted officers.

Officers were able to get the suspect into handcuffs and noted he appeared to be suffering medical distress,’ Elder said.

The video of the incident, which was posted to Facebook by Darnella Frazier, shows the white officer kneeling on the man’s neck as he is heard crying out in pain and gasping for breath.

‘I can’t breathe. Please, I need my neck, I can’t breathe, shit,’ the man can be heard saying after an officer asks him what he wants.

‘Get up and get in the car,’ one of the officers says as the man cries out.

‘I can’t…my neck, I’m through,’ he responds as his face is pressed against the pavement.

‘My stomach hurts, my neck hurts, everything hurts,’ he continued as bystanders tell officers to let him up.

‘This is why you don’t do drugs kids,’ an officer can be heard saying. At the video’s four-minute mark, the man goes limp with the officer’s knee still on his neck. The man was eventually taken to Hennepin County Medical Center where he died a short time later.

‘Whatever the man may have done should not have ended with a death sentence,’ Nekima Levy-Armstrong, a prominent local activist, told the Star Tribune.

What started as an alleged economic incident once again turned deadly for a black man.’ The FBI andThe Minnesota Bureau of Criminal Apprehension are reportedly investigating the incident

All body camera footage has been turned over to the BCA as part of the investigation.

Per protocol, the officers involved have been put on paid leave. They have not been identified as of Tuesday

Minneapolis Mayor Jacob Frey commented on the deadly incident Tuesday and urged anyone planning on protesting to take precautions because of the coronavirus outbreak.

‘If you’re sad, I get it, if you’re angry, that makes complete sense, if you feel the need to protest, of course, we want to make sure people are able to express themselves,’ Frey said. ‘

There is another danger out there right now, which is Covid-19.’