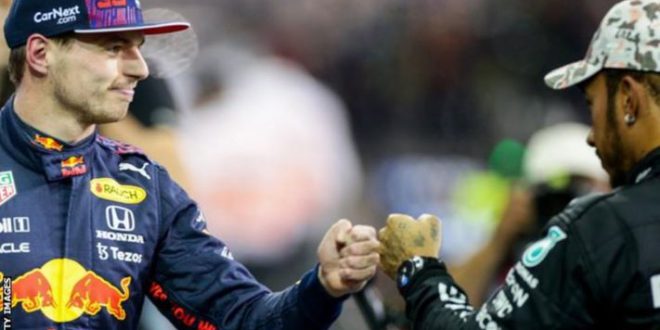 Hamilton looked to have his eighth world championship in the bag until Nicholas Latifi’s crash with a few laps remaining brought out a safety car.

That drew the Mercedes ace level at the top of the standings, but Verstappen remained ahead of Hamilton courtesy of his extra race win throughout the course of the season, making Sunday’s race a winner takes all affair.

Verstappen gained the upper-hand on Saturday afternoon, qualifying ahead of the British driver, but that advantage evaporated almost instantly on race day as Hamilton charged ahead at the first corner.

Amid talk of Schumacher’s collision with Damon Hill in 1994 and Ayrton Senna’s tangle with Alain Prost in 1989, there was much talk before the race of something similar happening here – and it almost did inside the opening minute.

Little over halfway through the first lap of the race, Verstappen spotted a chance to regain the lead and made an audacious lunge up the inside of the seven-time champion.

Just like in Saudi last week, the pair touched, only this time Hamilton was able to take avoiding action and escaped off a slip road, retaining the lead to the fury of Verstappen and the Red Bull pit wall.

Mercedes and Toto Wolff were incensed, having originally been told by race director Masi that lapped cars would not be allowed to overtake the safety car, a scenario that would have seen Hamilton draw level with Schumacher on eight world titles.

And while the recriminations over that decision will go on for some time yet, the madcap finish in Abu Dhabi was a somewhat fitting end to an F1 season that has delivered more madness than ever before.

For Verstappen, it ended in a first F1 title, and speaking immediately after the race he couldn’t quite believe what had happened – a sentiment likely shared by Hamilton.

He said: “It’s unbelievable. Throughout the whole race I kept fighting then there was the opportunity in the last lap, it’s incredible.

“I don’t know what to say. My team and Honda deserve it.

“Finally a bit of luck for me. I also want to say thank you to Checo, he’s been a brilliant team-mate.

“I don’t want to change ever. I want to stay with them for the rest of my life, if they will have me.

“I’m so happy. Our goal was to win this championship when we came together and now we have done that.”

To his immense credit, a shocked Hamilton heaped praise on Verstappen, congratulating him on his first world championship.

He said: “Firstly, congratulations to Max and to his team.

“I think we did an amazing job this year. My team, everyone back at the factory, have worked so hard this whole year, it’s been the most difficult of seasons. I’m so proud of them and I’m so grateful to be a part of the journey with them.