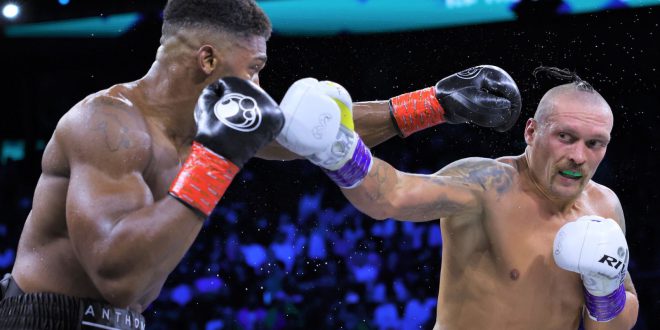 Oleksandr Usyk secures a second consecutive victory over Anthony Joshua to defend the unified WBO, WBA and IBF titles at the King Abdullah Sports City Arena in Jeddah; Usyk confirmed his place at the top of the heavyweight division with momentous rematch win over Joshua

On Saturday at the King Abdullah Sports City Arena in Jeddah, Usyk outpointed Joshua over the course of an epic 12 round battle.

Usyk did have to endure tremendous pressure from an implacable Joshua, who delivered a vastly improved performance from their first fight in September.

Joshua assaulted Usyk’s body with power-punches, nearly breaking through in the ninth round. But Usyk responded in remarkable style, rallying to hurt Joshua in the next round.

He drove Joshua back with left hands and finished strongly, clipping Joshua with heavy counter-punches to close out the final seconds of the bout.

The decision was closer than expected but Usyk was a deserving winner.