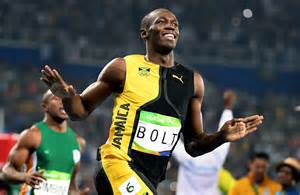 Usain Bolt has lost one of his Olympic gold medals after Jamaica were retrospectively disqualified from the 2008 sprint relay.

The decision to strip Jamaica of their 4x100m title deprives Bolt of one of his nine golds won across three Games between 2008 and 2016.

Carter ran the first leg of the Beijing final as Jamaica set a new world record, a mark they surpassed in London four years later.

Trinidad and Tobago are now in line for promotion to the gold medal position, with Japan taking silver and Brazil bronze.

The IOC announced in the run-up to last summer’s Rio Games it would begin retesting samples from 2008 and 2012 in a bid to restore confidence in the sport.

Usain St Leo Bolt, OJ, CD is a Jamaican sprinter who is regarded as the fastest human ever timed.

He is the first man to hold both the 100 metres and 200 metres world records since fully automatic time became mandatory.