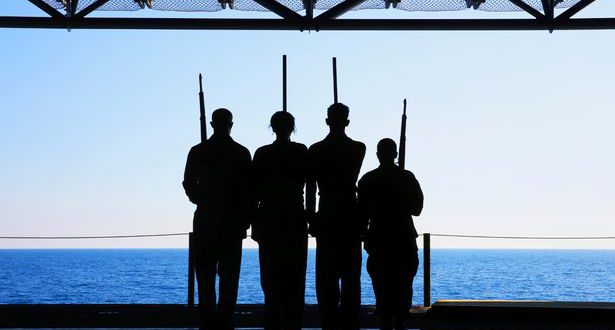 The USS Kearsafe is the latest vessel to have reported such an incident, as the US military begins to open up about the mysterious phenomena.

It’s thought that for several nights at least two objects lurked near the 40,500 tonne amphibious assault ships, while it was on a training exercise off the east coast of the US.

Sources familiar with the encounter described the phenomena as odd “balls of light”, which followed the ship around half a mile behind it, and 200 feet above the ocean.

Mr Beaty was contacted by a now retired US Marines officer named only as “Mark”, in relation to the odd experience.

The USS Kearsafe is the latest vessel to have reported a UFO ecnounter ( Image: Getty Images/Stocktrek Images)

At the time, USS Kearsage had been training ahead of an overseas deployment, featuring systems designed to take down enemy drones.

Amongst the weapons were anti-drone “Ghostbusters” style backpacks, and systems mounted on vehicles.

The ship’s public Facebook page has pictures which show their capabilities were on board at the time of the strange encounter.

It’s thought the objects were spotted by the desk watch at night – who could not gain thermal targeting lock on them – and the incident was recorded by the crew.

Apparently marines on board thought the unexplained objects were related to a surprise training exercise for the new anti-drone weapons.

But they discovered the countermeasures did not disrupt the objects, which were doing swooping manoeuvres as they followed the ship.

When USS Kearsage radioed command about the object, it was informed the objects were “not ours”, Mark told Mr Beaty.

The filmmaker is now working to uncover what happened in the latest UFO incident reported to have been encountered by the US Navy.

Following a landmark report last summer, which confirmed unexplained encounters, referred to as Unidentified Aerial Phenomena (UAPs), a new office has been set up in the Pentagon to report on UFO encounters.

Defence insiders, intelligence officials, senators and former presidents have all gone on record admitting there is unexplained something in the skies.https://get-latest.convrse.media/?url=https%3A%2F%2Fwww.mirror.co.uk%2Fnews%2Fus-news%2Fwarship-stalked-two-car-sized-26633136&cre=center&cip=21&view=web

Speaking to The Sun Online, Mr Beaty said: “So what once were UAP sightings that were ignored or never logged, today more service members are reporting them, this leads to the indications that more are being observed.”

He added the stigma around reporting these strange events is now breaking down.

Mr Beaty said: “In the past, it was much worse. Officers would actively avoid reporting or speaking about cases of UAP, as the fear of career suicide was very real.

“Today it’s a bit more relaxed since the UAP Task Force is actively seeking UAP reports and frowning on any stigmatization within the units.”

The documentarian also talked about the need for the military to be more transparent on this topic.

“While I commend our DoD and officers for handling the collection of data, at some point we need to focus public attention on the mysterious question of what these objects are, that is the ones that have defied prosaic explanation after investigation,” he added.